ONE of Scotland’s top private schools has banned pupils from playing with full-size footballs on health and safety grounds.

The £11,000-a-year school fears pupils could get hurt if they play with full-size balls.

But education and sports campaigners last night branded the step as “health and safety gone mad”.

Edinburgh Academy boasts Robert Louis Stevenson among its old boys and Sir Walter Scott was one of its founding directors.

The school also has a strong sporting tradition and has produced Scottish rugby internationals Mike Blair and Ross Rennie.

But concern about playground accidents led the school to crack down on football.

Deborah Meiklejohn, Senior Deputy Rector, at Edinburgh Academy, admitted that “as far as we know there have been no injuries”.

But she added: “There was a feeling that the children could cause themselves injury if they used a ball which was inappropriate.”

She said pupils in the senior school – aged 12 to 18 – were already required to use tennis balls for their kickabouts.

Now children in the junior school, aged 5 – 11, have been hit by new restrictions.

Meiklejohn said: “Children would bring in their own footballs to play with and some were bringing in full-size leather balls which were fully pumped up.

“The system used to be that if they took their own balls to school they had to show it to the teacher to see if it was allowed.

“The school decided that rather than have to approve whether a ball was right or wrong they made a decision to provide all the balls.

“To avoid any injury or breakages, the junior school decided to buy safe, environmentally-friendly balls which are smaller and softer than full sized balls.

“It allows the children to play in a sensible manner.”

But Nick Seaton, of the Campaign for Real Education, said: “It’s health and safety gone mad.

“Youngsters have played with all sorts of hard balls for years without complaints. This move spoils the nature of the game – it’s ridiculous.”

He added: “When youngsters are playing games, accidents do happen. It is not right to try to make everything as safe as possible.

“Often schools run by local councils can get ultra-cautious but you would expect an independent school to make a stand and show more leadership.”

Hamish Husband, spokesman for the Association of Tartan Army Clubs, said the only hurt a Scottish football fan was likely to suffer was his pride.

He said: “Our children are not fit enough and we are not producing enough athletes.

“So this is a strange decision given that football today is a non-contact sport. Where is the danger? Footballs do not injure people. I can’t think of a single incident.

“They are much lighter than they were 50 years ago and there is no reason to ban them.”

Husband said it was possible Edinburgh Academy’s health and safety decision could have unintended benefits for football skills.

“George Best and Pele trained with tennis balls. In a perverse way, playing with a smaller ball can help,” he said.

Concern is mounting that emphasis on health and safety rules is harming children’s development.

Some experts have suggested that wrapping youngsters in cotton wool makes them more likely to have serious accidents because they miss the opportunity to learn from mistakes. 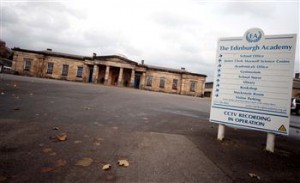 Tam Baillie, Scotland’s Children’s Commissioner, recently helped produce new guidance on handling risk to youngsters. He asked: “How can a child learn to prevent or avoid accidents, and become wiser in the process, if they are not given the chance to take risks and put their learning into practice? “

Schools have banned everything from playing conkers to sliding on playground ice patches in recent years. In March it emerged that pupils across Scotland have been banned from holding bake sales because councils believe they breach anti-obesity legislation.