A rare clock made in Edinburgh has been gifted permanently to National Museums Scotland by the Royal Scottish Society of Arts.

The regulator clock, which keeps time with astronomical precision, was made by the prominent Edinburgh clock-maker Thomas Reid in 1791.

Reid was active in the Society’s early days, and the clock was presented to the Society by Reid’s nephew and successor William Auld in 1846.  It carries an inscription on the dial recording the gift.

Although the clock was passed to the former Royal Scottish Museum (now the National Museum of Scotland) on long term loan in 1952, it has now been formally gifted on a permanent basis.

Robin Harper MSP, who is President of the Royal Scottish Society of Arts, said: “Thomas Reid was perhaps the finest clock-maker that Scotland has produced.

“The RSSA is delighted to present this significant regulator clock to join one of the Museum’s most important collections.”

Dr Gordon Rintoul, Director, National Museums Scotland, added: “I am grateful to the Royal Scottish Society of Arts for giving us this rare clock, which showcases Scotland’s achievements in horology and is now on permanent display in our Industry and Empire Gallery.’

Thomas Reid was one of the most eminent clock-makers of his time, the regulator clock being the master clock from his shop.

The Royal Scottish Society of Arts was established in 1821 and is still active in Edinburgh,  concerned with improvements and progress in science, medicine and technology and presents a series of evening lectures throughout the year. 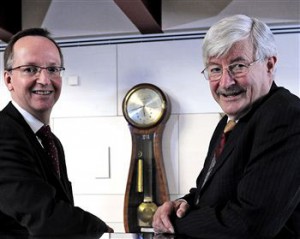