AN  under threat factory which employs dozens of vulnerable disabled people in Edinburgh has been given a six month stay of execution after a last minute deal was struck to put staff on a three day week.

BlindCraft, based in Craigmillar, was to have been axed at a full meeting of City of Edinburgh Council yesterday as part of a cost cutting drive.

But late negotiations saw councillors agree to backtrack on the controversial plans which had sparked a wave of public anger.

A report must first be submitted to the Policy and Strategy Committee for the go-ahead, but it is almost certain to be rubber stamped after workers agreed to forsake 40% of their earnings.

Stephen Reilly, 48, a BlindCraft employee for nearly 14 years, said: “BlindCraft gives people a chance to do meaningful work. I think the importance of it is that we need to keep BlindCraft open for the future generations, to give people a target so that they have got something to look for in the future.

“When the politicians make these decisions they have to realise if the disabled people get made unemployed, that’s less council tax they have to pay, it’s more benefits they have got to ask for and all of the people in BlindCraft want to contribute to society rather than take out of society.”

“(BlindCraft) is very important, it means everything to me. Not only just working but getting out and having something to do.”

“Every city in Scotland has got one and I think we should strive to keep them and strive to promote them and make sure that disabled people are getting employment.

“We have been in negotiations for the last 18 months with management, various parties have been organising campaigns, petitions, things like that.

“It’s only now that we are fully embracing that and getting together to help save BlindCraft.

“I mean people here get out their beds at 5o’clock in the morning. This is their life.”

Student Hannah Lister and her friend Janis McCulloch led the Save BlindCraft Campaign.

They raised over 1,000 signatures on a petition supporting the workforce.

But Miss Lister said that the result is only a short term solution: “We welcome the 3 day week because it’s the lesser of two evils so to speak. But you’ve got to remember that these people will still be taking a pay cut and it’s not ideal.

“BlindCraft has rode out recessions before, it’s 200 years old. A 3 day week is a good option for now because it is in a bad state and the management’s bad and we need to sort it out.

“But in the long term we need to get a more sustainable solution for BlindCraft.”

Kevin Duguid, service and conditions co-ordinator for Unison, said: “If you had asked me this time last week, BlindCraft I believe would have been closed. But we have managed to speak to the right people to put the arguments forward and we’ve got a platform to build from.”

Mr Duguid added that the future of BlindCraft in Edinburgh is to work with the other workshops in Scotland. He said: “We need to build synergies between these workshops for them to survive as well as ourselves.

“It’s about the future of supported employment in Scotland, not just Edinburgh.”

A council spokesman said: “During the consultation period the trade unions brought the three day working week proposal, which had initially been rejected, back to the table and this was agreed at Full Council.

“Before we move forward on how this will be implemented an Equalities Impact Assessment needs to be completed and approved.

“We can then look at what measures are needed to start the three day week. During this time we hope potential solutions to secure the long term future of the factory will be brought forward.

“What is important now is to ensure everything is done to support all the staff through this uncertain period.”

The Equalities Impact Assessment will be completed by next week and is expected to be discussed at Policy and Strategy Committee on November 30. 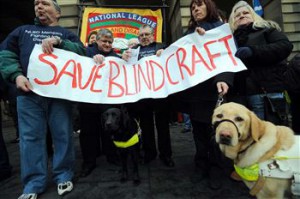