AN organisation dedicated to upholding Scottish traditions has attacked the long-kept practice of being a ‘true Scotsman’. 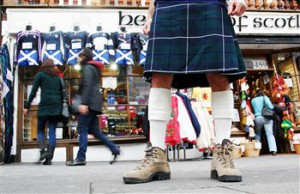 The Scottish Tartans Authority (STA) has slammed the tradition of men wearing nothing under their kilt, calling it “childish and unhygienic”.

Brian Wilton, director of STA, said those wearing kilts should have the ‘common sense’ to realise they should wear underwear beneath their country’s national dress.

“People should not be browbeaten into believing that nonsense.

“Just because Highlanders wore nothing in the days before Y-fronts were invented doesn’t mean that we, in the 21st century, should wear nothing too.

“Sending children up chimneys is traditional too, but we don’t do it now and we shouldn’t apply to wearing nothing under a kilt.

“You only have to ask hire specialists about the problems they have cleaning their kilts.

“We have heard quite a few hygiene horror stories.”

But, Mr Wilton’s claims were condemned by Scottish kilt makers and wearers, telling him to leave it alone.

Former Formula One driver, David Coulthard, from Twynholm, Kirkcudbrightshire, said: “Kilts are from the past and so is the tradition of not wearing any underwear.

“I’m proud to be a true Scotsman. It’s a tradition that should be left alone.”

The 29-year-old said: “I have about five kilts. Ten years ago, I even registered my own Coulthard tartan because Coulthard is an English name, sadly.

“That said, I actually don’t wear my Coulthard kilt much as it is a bit too bright.

“I overdid it with the blue of the Saltire.

“I’ve been wearing kilts since I was a little boy and will continue to wear my kilts in the time-honoured fashion.

“There is nothing childish or unhygienic about it.”

Ian Chisholm, an Inverness-based kilt maker and spokesman for the Scottish Kilt Makers’ Association, said: “The tradition of no underwear being worn was a stipulation of Scottish military regulation.

“To say it is unhygienic is wrong.

“The freedom of movement is healthy.

“We always tell customers to wear nothing under the kilt if everything is in good working order.”

Jamie McGrigor, Tory MSP for the Highlands and Islands, who campaigned for the introduction of a Scottish Tartan Register, said: “I have normally worn underwear with my kilt.

“In the West Highlands, midges can mount alarming and unexpected attacks on so-called true Scotsmen.”

Kilt maker Slanj, which has provided Highland dress for Billy Connolly, Sir Sean Connery and Ewan McGregor, insists underwear must be worn under hire kilts because some had been returned in such a dirty state they were too unhygienic for staff to handle.