Snowbot set to wow crowds this winter in Edinburgh 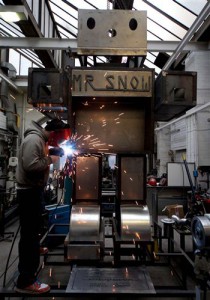 The towering Snow-bot – which was receiving some last minute tune ups last night – will take up residence in Edinburgh next week as part of the city’s Edinburgh Sparkles campaign.

Matthew Swan who was responsible for the initial design and the projects logistics said: “It’s a bit of a monster”.

“It looks quite imposing.  I have never made anything that big before, all I’ve done before is 2D pictures.

“I don’t think Thomas or I knew just how big a project it was going to until we got started.”

Mr Snow will be painted in the following few days, Matthew said he thought the colour should make the large robot look less intimidating:

“It’s got a nice smiley face so I really hope it’s going to be well liked.  The majority of it will be painted baby blue with red boots and a red nose.

“The red boots are not intended to be any parody of Santa or a traditional image of Christmas but I suppose red does have a strong link to Christmas.”

The two artists won a competition run by Destination Edinburgh Marketing Alliance to appear in the city centre as part of the ‘Alternative Christmas Decorations’ during the city’s Edinburgh Sparkles campaign promoting the festive holidays.

A spokesperson for DEMA said: “I think that the robot compliments the rest of Edinburgh’s more traditional decorations.”

She added: “It was part of the brief to make the artwork alternative and interactive.  There will be several snow shows throughout the day which kids and adults should enjoy.”