Shamed teacher struck off over sex with pupil

A DISGRACED teacher who had sex with a teenage pupil during a two year affair has been struck off.

Shamed Thomas Docherty, 51, preyed upon the vulnerable schoolgirl when she was just 16 years old.

The religious education teacher, from Innerleithan in Peebleshire, even had sex with her on school trips – despite his wife travelling with him at the same time.

He narrowly escaped a jail sentence in July this year.

But Sheriff Alistair Noble told him: “Your initial actions were of a predatory nature. The complainer was a vulnerable schoolgirl.”

Today (Thurs) Docherty failed to turn up and face a disciplinary hearing of the General Teaching Council in Edinburgh.

The hearing was told that Docherty had been convicted of two charges of having sex with a minor and had been placed on the sex offenders register.

Paul Marshall, solicitor to the GTCS, said: “This is a serious criminal offence aggravated by the fact it involved children while that teacher was in a position of trust.

Marshall said there was no doubt the convictions were relevant to Docherty’s fitness to practice.

He said Docherty was a teacher of religious, moral and philosophical studies and his behaviour amounted to a “gross breach of trust”.

He said the offences happened over three years and the Crown had prosecuted at a very serious level.

Marshall added: “Given the nature of the offences the only course open is to remove from the register for the maximum period. ”

After considering the case, the panel decided to remove Docherty from the register.

They also said they would write to Scottish Ministers asking them to consider excluding Docherty from working with children.

Edinburgh Sheriff Court heard previously how married dad-of-three Docherty targeted the 16 year-old schoolgirl after offering to help her to prepare for exams.

His wife and other teachers eventually realised the pair were becoming close, but he managed to carry on the affair until 2007.

He was placed on the sex offender’s register in May after pleading guilty to two charges of sexual intercourse while in a position of trust.

Docherty was sentenced to carry out 240 hours community service in July, placed on probabtion for three years and ordered to attend a community sex offenders programme.

He was also placed on the sex offenders register for three years. 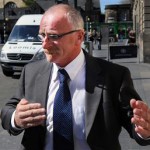