Kathy Kennedy, 71, from Penicuik, Midlothian has Celiac disease – which means that she cannot eat anything which contains gluten – and has been unable to taste the Scottish delicacy for more than 50 years.

But thanks to her local chip shop The Tower coming up with a special batter Mrs Kennedy can now have fish and chips as often as she wants.

She added: “It was my neighbour who told me about The Tower so I went down there and it was so nice to see that they had gluten free on offer.

“I’ve never seen it before and I couldn’t wait to try fish and chips again. They are great – big and chunky and not greasy at all.

“It’s been fantastic to try it all again and so tasty compared to some of the supermarket gluten free products that they have on offer.”

Mrs Kennedy has lived with a gluten free diet since she was just 18 months old and spent years in hospital undiagnosed during the war.

She said: “I spent six or seven years in hospital as the doctors couldn’t diagnose it in those days.

“As it was during the war days, rationing made it very difficult to sustain my diet without eating bread.

“ I remember I was given two ration books and lots of bananas.

“It’s not been a burden on my life as I’ve grown up with it from a very young age. I just avoided the food that made me react in some way.

“I feel sorry for children who will never be able to taste the food that I’ve tried – it’s a very complicated diet and it’s very difficult to sustain.”

Any foods that contain wheat, barley, oats and rye are a no go for Mrs Kennedy which means that she has never had a birthday cake either.

She said: “You have to read the labels on everything. Flour, which is the main thing you can’t have, is hidden in everything, Smarties and silly things like salad cream.

“I need to have specially made sausages. “

Since opening earlier this year, The Tower became the first takeaway in Scotland to offer its customers a dedicated range of gluten-free food upon request at all times.

They are also expanding their gluten-free menu to include a range of pizzas.

The Tower uses Glu-2-Go batter for its wheat and gluten free products, which has been created by an award winning fish and chip shop in Polmont, near Falkirk.

Domenico Pia, owner of The Tower, said: “I came across a few friends and family that suffered from Celiac disease and I thought maybe why did they not have the opportunity to have the usual thing that people eat every day.

“I thought why not give them that gift.

“We have gluten-free customers who have not been able to eat fish and chips for many years and they really sing our praises for putting it on the menu.

“Many say they can’t even tell the difference between the gluten free and the normal batter. 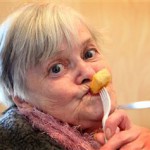 “We’ve had people travelling from all over to try it out.”