Despite the snow and icy conditions on Sunday evening, the Braehead Clan team and their fans had brought two coach loads along the M8 to Murrayfield Ice Rink for their second Scottish derby this season in the Elite Ice Hockey League.

Who would win between the Weegies and the Burghers?

Although there was a noticeable lack of supporters compared to normal, those who had braved the elements to be there sure made their voices heard for their respective teams.

It was the first of a run of five home games for the Edinburgh Capitals.

During the first minute and a half,  the action was fast and from one end to the other and back again.

Unfortunately though, the Capitals fell behind within the first two minutes with a goal by the Clan’s Captain Brendan Cook (18) with assists by Mathieu Wathier (4) and John Landry (27).

The game continued at a frenetic pace going from end to end and the Capitals maintained pressure on the Clan’s goal, ending with a great shot by Capitals’ Alex Kim (91), saved by the Clan’s netminder, Perras (29).

Just after four minutes the Clan were caught offside. Following the face off, Capitals’ Chris St. Jacques (14) unleashed a shot and there then followed an intense onslaught by the Capitals, but the Clan’s defence was strong and repelled the attack.

Then came another attack by the Capitals but once again they were shut out by the Clan.

Third time lucky for the Capitals though.  The attack came in hard and strong and just before eight and a half minutes Alex Kim (91) scored the Capitals’ equaliser with assists by Jeff Hutchins (71) and Martin Cingel (29).

The speed of the game was amazing.

Capitals’ Jeff Hutchins (71) got a good shot on goal, but a great save by Perras (29) followed an offside decision against the Clan.

The action was soon back up the other end of the rink and the Capitals’ netminder Scott Reid (33) made a great save with support from Willie Nicolson (22).

Then the Capitals turned up the heat once again and Kyle Horne (5) managed two shots on the Clan’s goal, although both were saved.  Then the Clan went on the attack but the Capitals’ defence was strong.

The game continued with high energy, end to end action and then came to a sudden stop as the puck disappears up the shorts of the Capitals’ Captain, Martin Cingel (29).

Shortly after the game continued, the referee missed a big trip on Capitals’ Chris St. Jacques (14), before the home team launched a major offensive on the Clan’s goal before the hooter sounded for the end of the first period.

The second period got underway and after just nine seconds the Capitals were caught offside.  The face off was good for the Capitals and Jacques Perrault (23) got a shot on goal and then Capitals’ Chris St. Jacques (14) and the Clan’s player coach Bruce Richardson (9) were squaring up to each other behind the net.

The game continued from end to end at a fast and furious pace but as the clock hit twenty two minutes and twenty two seconds the Edinburgh Capitals went on the power play as the Clan’s Kevin Phillips (7) received a two minute penalty for slashing.

Despite the number of supporters being lower than usual, given the weather, both sets of fans were vocal and making themselves heard, leaving their teams in no doubt about their presence.

Then not long after both teams were full strength, Alex Kim (91) of the Capitals received a two minute penalty for holding.

The Clan went on the power play and maintained the pressure on the Capitals’ goal but only managed one shot, literally seconds before the Capitals were back to full strength.

Just before the game reached thirty minutes gone, Martin Cingel (29) scored and took the Capitals into the lead with assists by Alex Kim (91) and Jeff Hutchins (71).

Then the Capitals maintained a good two minute offensive on the Clan’s goal, to no avail.  The action then went to the other end as the Capitals’ Jacques Perrault (23) blocked a shot by the Clan, skated the length of the rink and fired off a shot which was deflected by the Clan’s Perras (29).

The action returned to the other end of the rink and Clan’s Ryan Campbell (37) knocked the Capitals’ goal from its position.

Then from nowhere just after thirty five minutes Jeff Hutchins (71) scored, assisted by Alex Kim (91), making it three goals to the Capitals and the Clan on just one.

The Clan’s Kevin Phillips (7) took out his own netminder, Perras (29) during an attack by the Capitals.

With just thirteen seconds remaining on the clock, the Capitals’ Scott Reid (33) made an important save.

The third and final period kicked off and with just one minute twenty nine seconds on the clock, Chris St. Jacques (14) skated around the goal and landed one in the back of the net, making it 4-1 to the Capitals with the assist by Adam Taylor (7).

Ten minutes into the third period,  one of the Clan’s team took out the Capitals’ Neil Hay (16) as he was skating down the ice and gloves came off as players were squaring up to each other from both teams.  The Clan’s John Connolly (17) received a two plus ten minute penalty.

Braehead Clan’s player coach, Bruce Richardson (9) managed to claw a goal back, making it 4-2 to the Capitals.

The Capitals were caught out and two of the Clan’s team were up against the Capitals’ netminder but failed to capitalise and the shot was way off target.

After the face off, the Capitals were skating hard up towards the Clan’s goal and shouts for a trip were loud but the referee was so far back down the rink he, never saw a thing.

Jeff Hutchins (71) scored the Capitals’ fifth goal and his second of the night with assists by Alex Kim (91) and Kyle Horne (5).

Then the Capitals went on the rampage with goal number six coming only moments later,  scored by Chris St. Jacques (14) and assists by Kyle Horne (5) and Adam Taylor (7).

After the Clan’s netminder Perras let in the sixth goal he was then replaced by Michael Will (33).

The Capitals were caught offside and before the face off could happen, their netminder Scott Reid (33) was brought off to a standing ovation by the home fans and replaced with Craig Holland (31), so both netminders had been replaced within a minute of each other, one for letting in too many goals and one for saving goals!

The Clan were then deemed to be offside, but straight from the face off they went down the ice and scored, clawing one back making it 6-3 to the Capitals.  The Clan’s goal was scored by John Landry (27), assisted by Bobby Chaumont (21) and Jordan Krestanovich (10).

Just one minute later the Capitals’ Jeff Hutchins (71) scored his hat-trick with assists by Martin Cingel (29) and Jacques Perrault (23).

Then with just ten seconds remaining on the clock, Alex Kim (91) wraps the game up with the Capitals’ goal number eight assisted by David Lomas (3) and Evan Schafer (25).

An absolutely action packed evening ended with a rare win for the Edinburgh Capitals.  The final score was 8 – 3 to the Capitals. 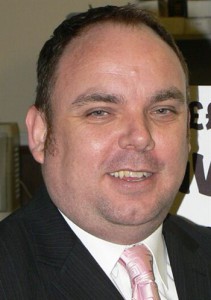