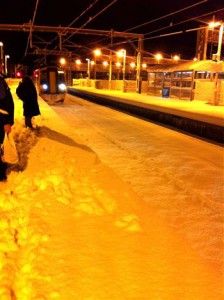 10.45am update: Scotland was hit by travel chaos this morning as the nation woke up to white out conditions.

All local authority run schools in Edinburgh and Midlothian were among those to be shut, along with East Lothian, West Lothian and all schools in Fife.

Rail services between Edinburgh and Glasgow were severely disrupted after a branch fell on the line at Linlithgow.

Other routes were badly effected and timetables subject to change or running only partial routes.

Edinburgh Airport was forced to close its runway for a second day because of the heavy snowfall but hoped to resume at least some flights at around lunchtime.

A lorry jack-knifed near Harthill westbound adding to the chaos on the M8. Huge queues of traffic meant hundreds of people were left stranded for hours.

The M9 is Stirlingshire was said to be treacherous while in Fife, the A909 at Cowdenbeath was closed after a tree fell.

Lothian Buses and First Buses said they were operating only limited services.

Emergency services and businesses in around Edinmburgh, Fife and the Lothians also had to contend with fewer staff as thousands struggled to even make it to work.

While a huge consignment of salt to be used to treat roads and footpaths arrived at Leith Docks ready for a fleet of trucks and other ships to convoy to the worst affected areas.