AN 18-year-old man has appeared in court in connection with a serious sexual assault on a woman who was found dead at her home in Drylaw, Edinburgh.

The body of 62-year-old Marie Reid was discovered at her home in Easter Drylaw Way two weeks ago, after a member of the public raised concerns about her health.

Detectives are continuing to investigate the cause and circumstances of her death following an inconclusive post mortem.

Soso made no plea or declaration and was committed for further examination.

He was remanded in custody until his next appearance next week. 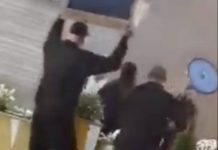