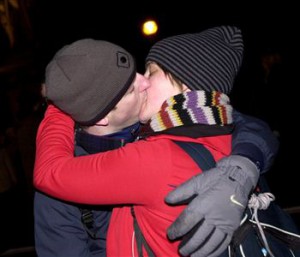 SCOTS are being encouraged to make the best of the extreme winter weather and have more sex.

Sue Maxwell, a sexual and relationship psycho-therapist with Relationships Scotland said many couples who seek counselling are not finding the time to have sex.

And she says the recent influx of snow provides the perfect opportunity to spend time in bed with their partner.

She said:”In this weather I would say why not?

“Couples should really see it as an opportunity to just down tools and have fun. Make it spontaneous”

“They shouldn’t be stuck at home and think ‘what can we do to the house’ – it is really an opportunity to have a bit of fun and enjoy yourselves.”

She claimed people should spend less time worrying about getting to work – and more time on the job.

She said:  “Many people are desperate to get to work and despite the weather will get out the four-by-four, determined to get through the snow.

“People try to fight the weather and avoid being intimate with their partner.

“They are keeping themselves back.”

“Going for a walk in the snow for half an hour , that may be enough time  to have an intimate experience to diffuse any tension or work stress and allow couples to be more intimate sexually.”

“Many people work long hours and put their job or their children as their number one priority.

“They need to find time for sex.”

“Scheduling in sex, that’s good.  Many couples find that they go to work all day and the children are home when they get there and they don’t get time to themselves especially when the kids get older.

“Many people if they are forced into being together there tends to be lots more intimacy with couples and more sex.

Statistics from the General Register of Scotland show that over the last three decades, birth rate figures have, on average, been higher in October.

Such a trend could lay claim that the cold January weather encourages couples to get intimate, more so than any other time of the year.

Expert, Kirsty McacLachlan the head of demography at the General Register of Scotland said: “Over the last 20 or 30 years there have been slightly more births on average in October and slightly less births in February and December.”

Dr Jim Chalmers, consultant in public health with the NHS National Services Scotland added: “There is a peak in conceptions in December and January during the Christmas holiday period.”