Mitsubishi to invest up to £100m in Scottish offshore wind 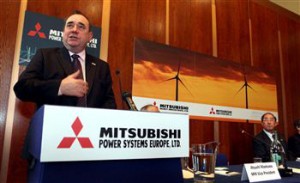 SCOTLAND has been chosen by a top energy leader to be the site of a new engineering facility meaning an investment of up to £100 million over five years.

Mitsubishi Heavy Industries (MHI) through its subsidiary Mitsubishi Power Systems Europe (MPSE) announced yesterday (Fri) that it is set to develop a world leading offshore wind turbine in the country.

The acquisition of AIP will safeguard 25 jobs and create around 30 engineering posts at the Scottish technology firm in 2011.

Over the next five years, MPSE expects to create up to 200 jobs at the new Centre and at AIP.

First Minister Alex Salmond said: “Scotland is a leader in the development of clean green energy and boasts a world-class research and development base that is pioneering technologies that will have a global impact on combating climate change.

“I am delighted that Mitsubishi is establishing a presence in Scotland through the creation of a Centre for Advanced Technology and the acquisition of Artemis Intelligent Power.

“Mitsubishi’s decision to invest in Scotland demonstrates how Scotland’s renewable revolution is gathering pace and that we have the quality infrastructure and skilled workforce to deliver success in this rapidly-growing industry.”

If the technology is successful MPSE have said it could lead to the creation of a major offshore wind turbine manufacturing site in Scotland.

Akio Fukui, MPSE chief executive officer, said: “The successful development of this technology will make Scotland a key player in the offshore wind supply chain, potentially leading to the development of manufacturing capacity delivering to the Scottish, UK and European markets.

“This exciting project squares the circle of Scottish-Japanese industrial history dating back to when Thomas Glover assisted in the creation of MHI in the 1800s.

“The first Japanese naval vessel was built in Scotland in the late 19th century, and now the first game changing offshore wind turbine will be built here too.

“This builds on our existing partnership with SSE on low carbon energy developments, including offshore wind, and we are very pleased to be working with the UK and Scottish Governments to turn this vision into a heavy engineering reality.”

The deal has seen MPSE acquire 100% shareholding in AIP, which is based in Loanhead.

AIP will continue as an independent technology company, and AIP’s current organisation of senior engineers will be maintained.

Dr Win Rampen, managing director of AIP, said, “This marks a huge step forward for the development of our game-changing technology.

“Drawing on the breadth and depth of MHI expertise and skills, AIP look forward to accelerating our R&D work with a view to our technology being used in turbines in UK and European waters by 2015.”

Charles Hendry, UK Minister of State for Energy, said: “I want the UK to be the world’s number one destination for the research, development and deployment of offshore wind turbines.

“This announcement is a real vote of confidence in innovation in our renewables sector and I am delighted that the potential of this technology has been recognised by a major global player. This represents exactly the kind of investment we want to encourage in the UK.”

The news has also been welcomed by WWF Scotland.

Dr Richard Dixon, director of WWF Scotland said: “The news that Mitsubishi has decided to make a major investment in our renewable industry demonstrates that Scotland is a major global player on marine energy.  This investment will help create green jobs and deliver clean electricity.  Is shows the huge opportunities we have to develop the green technologies that will play an essential role in global efforts to tackle climate change while also helping build a low-carbon economy for Scotland.

“This investment is another nail in the coffin for the backward looking application to build a new coal-fired power station at Hunterston and we continue to call on the Scottish Government to reject the proposal.

“Combined with today’s news of further commitment to a European clean energy grid, this deal with Mitsubishi bodes well for Scotland’s green future.”

Scotland “most attractive” location for investors in UK outside London