A SKIER who launched himself down Arthur’s Seat in Edinburgh has revealed that he may now get sponsorship due to the success of a YouTube video showing him perform the terrifying stunt.

The mystery skier has been revealed as Gareth Trayner, 30, head coach of the British Children’s Ski Team.

And thanks to a video filmed by James MacDougall, YouTube user y2james99, the experienced skier has received a call for potential sponsorship for the British

Mr Trayner said: “I received a call about sponsorship after all of the coverage the video has had.

“It’s great that something like this could happen. It shows someone is always watching.”

The video was only posted on the site on Wednesday and already it has had thousands of views – more than 22,000 hits since Wednesday.

It shows Mr Trayner hurtle down the terrifying slope. 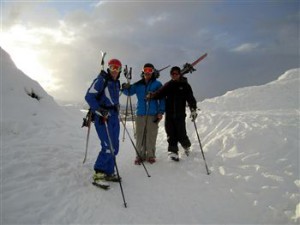 The daredevil was accompanied by his two friends, World Cup ski racer Finlay Mickel, 32, and ex-Scottish team athlete Jimmy Gill, 33, and each made three runs.

Mr Trayner added: “We saw the guy videoing it and didn’t really think anything of it. There was a bunch of people taking pictures and they were ‘whooping’ as we went down.

The trio raced down the slope in the direction of the Scottish Parliament before coming to a stop just before Queen’s Drive at the base of the 823ft hill.

Mr Trayner added: “The guys that I did it with had both been skiing up Hillend the day before so we thought why not try Arthur’s Seat.

“It was pretty cool. We are all skiers and were all itching to go skiing and couldn’t drive anywhere far so we thought we would make the most of the snow in Edinburgh.

“It is quite dangerous but we risk assessed the situation before we went.”

But he warned against anyone trying to copy the feat.

He said: “I would advise everyone else to go to Hillend. It’s fine for us to do it because we’ve all skied a lot.

“But it’s a rocky run – you wouldn’t want someone thinking they could do it and hurting themselves.”

Staff at Holyrood Park also warned that this is extremely dangerous.

A spokesperson for Historic Scotland said: “Although we understand that people want to get out and enjoy the snow, it is important that this is done safely.

“Even for experienced skiers who know the terrain of the park, fresh snow can bring a new dynamic and cover hidden dangers.

“We would urge anyone who plans to ski in the park to stick to the lower areas, that they are respectful of other park users and keep clear of the roads, and take personal responsibility for their actions.”

Mr MacDougall, 27, said that the video was the first he had posted on YouTube.

He added: “It’s quite a good number of views for my first video.

“I saw one guy going down and managed to get him on video.

“I thought it was a bit mad because it was such a steep incline. I was quite impressed because you don’t know where bushes and things are.”

Mr MacDougall said that it was difficult to walk up Arthur’s seat never mind ski down it.

He added: “I did get caught halfway up and it was quite bad weather.”