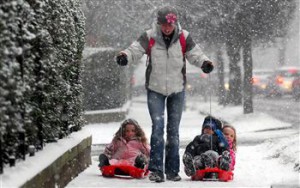 DIY stores say sales of rock salt and grit have shot up by more than 1000 per cent in recent days as Brits try and get a grip on the white out conditions.

Bosses at B&Q – which has 28 stores across Scotland – say they are going through thousands of bags.

Steve Guy, Seasonal Trading Manager at B&Q, said:  “Sales are up a massive 1224 per cent compared to this time last year.

“Sales of shovels have risen by 216 per cent and sledge sales hit almost 3,000 last week.

“We have had to order an extra 10,000 to meet customer expectations this week and next.”

“The demand for winter fuels has also soared as customers stock up on wood, kindling, logs and coal –  sales are up 230 per cent year on year.”

Supplies of winter motoring products including de-icer, anti-freeze, screen wash, scrapers and snow chains are flying off the shelves.

Mark Dolphin, Winter Motoring Expert at Halfords, said: “In the past week, our Scottish stores have seen phenomenal sales of de-icer, scrapers, screenwash and antifreeze, a trend which has been reflected across the UK as a whole.”

“We have plenty of stock for the week ahead and we are working hard with our suppliers to ensure consistent stock levels if this spell continues for the next month as predicted.

“Our suppliers are moving to 24 hour production to meet demand – we just need the roads to stay open to get it delivered.”

Pippa Thackray, marketing director for Tiso, says the best-performing stores are those located on the city centres.

She said: “Our Rose Street store in Edinburgh has been very busy because of its convenient city centre location.

We are not relying on external couriers.

“Extra van runs are in place across the country and we are closely monitoring road conditions via web-cams to get stock to the stores in the north.”

In the past week Tiso’s impressive sales figures confirm shoppers view the store as a one-stop shop for all their winter clothing needs.

For those who don’t want to squander too much money on clothing best suited to a ski slope, High Street favourite TK Maxx, which recently opened its largest UK branch on Glasgow’s Argyle Street, said it has plenty of affordable snow-proof clothing.

“We have lots of boots, hats, gloves, knitted scarves and snoods as well as outerwear such as jackets and waterproof trousers, which are proving very popular given the wintry weather,” says Helen Gunter, TK Maxx spokesperson.

“We have daily deliveries bringing up to 10,000 new items to store each week .”