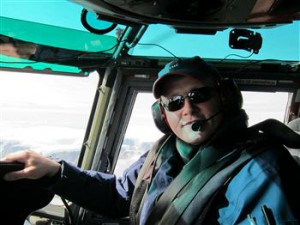 IT was a journey that took 18 days with 28 fuel stops.

But one brave helicopter pilot completed a mammoth mission to fly a chopper all the way from Aberdeen to South America.

Captain Andrew Smith, 35, from Sauchen in Aberdeenshire, works for CHC Helicopters, a company which normally transports staff to offshore oil rigs and platforms.

But the unusual request came in August, when Captain Smith was asked to take one of the choppers – a Eurocopter EC225 – out to Cabo Frio in Brazil.

He spent a week frantically planning for the 9,500-mile trip with co-pilot Dave Claire, from Inverurie, and engineer Patrick Atkins, from Belfast, which he says was an “amazing adventure”.

Captain Smith said: “Oil is going crazy in Brazil just now, and they need more helicopters out there to fly people on and off shore to the rigs.

“I’ve never completed any journey this long, with the route we had to take to allow for refueling stops it meant the distance we covered was actually further than flying to Australia. 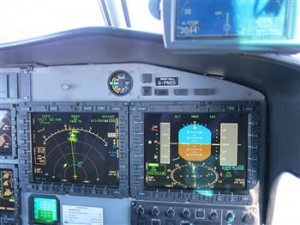 “It was only when we were being flown home from afterwards that we realised the vastness of it – it took over two hours just to clear Brazil on a plane.

“For a journey this extensive we would normally have had double the size of the fuel tank we did – and therefore we would have had half as many stops.

“Our supplies could only last just under three hours, but I’m glad we got to stop in so many places as some of the things we saw were just phenomenal.”

When flying over Iceland on the first day of the expedition, the team was granted permission to circle over Eyjafjallajökull – the volcano which had caused chaos for airlines and passengers during the summer this year.

Captain Smith said: “We got great views of the volcano – which was really lucky as it is often shrouded in clouds.

“Although it was on the first day it was definitely one of my highlights, it was just amazing.”

The following day the three-fold crew were delighted to fly over a group of about 30 whales maneuvering themselves between icebergs, as they made their decent into Greenland.

The crew’s route also took them through Canada, where they took their first day off and visited an Inuit village.

Captain Smith, who studied Biochemistry at Edinburgh University before going on to train as an RAF squadron, said: “When we were flying over Canada we only spoke to one air traffic controller the whole time, it was crazy to have so much freedom. 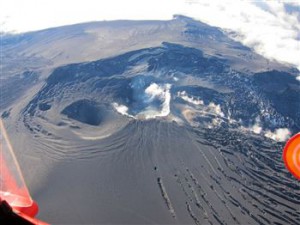 “The people we met along the way were some of the most interesting characters I’ve ever spoken to.

“These Inuit people really do live another life, very simple and survival-based.

The team took a Saltire flag on and asked new friends in each country to sign it for them as a keepsake.

“After Canada we had a few refueling stops as we headed down the USA, before heading to the Bahamas.

“I think that was another of my favourite places – you hear people say it is paradise there but it’s only now I understand what they’re talking about.

“Then we flew through the British Virgin Islands where we took a break in Tobago before reaching Guyana and French Guiana in South America.

“If you can imagine, it was a rainforest in South America, where everyone spoke French.

“I was surprised when we reached Brazil as well – I was expecting it be very third world but all of the cities were very impressive and Manhattan-like with skyscrapers.”

Captain Smith said the once-in-a-lifetime experience is one he will never forget, and he says he was extremely lucky to be picked. 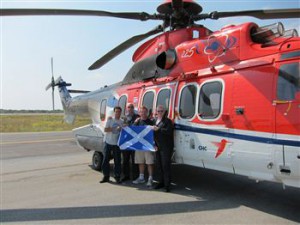 He said: “As we only had a week to prepare, there wasn’t much thinking time before hand, but now reflecting on it I am amazed by everything I saw and I’m so glad I was asked to pilot the mission.

“Of course there were ups and downs with weather delays and the fact we ate nothing but rubbish for 18 days, but I feel blessed because it is an amazing adventure that barely anyone else has ever been on.”

Below is a compilation of video clips taken by Captain Smith as he made his journey, including pictures of an ice cap, lightning storm, flying over the Bahamas and landing in Greenland.

Timeline of the team’s journey to Brazil