WEIRD, wonderful and down right woeful excuses involving squirrels, hamsters and sleeping with a neighbour have been used in an attempt to avoid paying the TV license this year.

The daft stories provided by people found to be without a license have been compiled into a list of the top ten excuses by the authority, TV Licensing.

This year appears to have encouraged the most bizarre responses from fee dodgers including: “My house was invaded by a squirrel, which weed on my TV, so now it doesn’t work properly.”

On a less animalistic and more simplistic tack: “I don’t watch the television; I just use it as a light in the dark.” 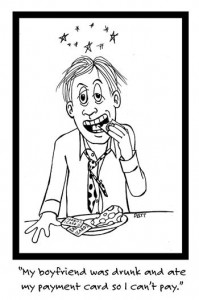 The TV Licensing officers were also met with a few bold attempts to delay their investigations: “Can you call back later? I want to finish watching the end of this TV programme.

The excuses in Scotland were equally, if not more, ridiculous and featured animals and infidelity: “I don’t live here, I am just looking after the hamster.”

“You can’t speak to my mum about us not having a TV Licence – she’s in bed with the neighbour.”

Scots also tried to baffle the officers with nonsense: “I don’t need a licence, I don’t have a TV.  That’s not a TV, that’s a microwave.”

Although the variety and creativity of excuses has appeared to constantly change, the fact remains the same, watching TV without a license is against the law.

TV Licensing officers were not distracted by the colourful accounts and caught more than 38,000 people in Scotland in the first 6 months of 2010.

Fergus Reid, TV Licensing spokesperson for Scotland said: “We’re effective at catching evaders, but we would always rather people pay than risk a fine of up to £1,000.  To help those that may find it difficult to pay in one go, we offer a range of payment options to help spread the cost – all of which can be set up quickly and easily online or by phone if you prefer.”

Joanna Elson OBE, chief executive of the Money Advice Trust, added: “Your TV Licence should be treated as a priority debt, alongside expenses such as your mortgage or rent, council tax and gas and electric bills. Those struggling with their finances should seek free, independent advice from a charitable organisation such as National Debtline or Citizens Advice. It is also worth noting that it is possible to pay your TV Licence in weekly instalments at a PayPoint outlet, over the phone, online or via SMS by joining the cash payment plan.”