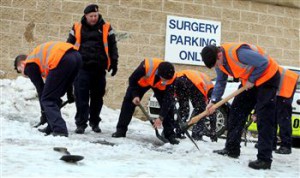 IT started on the stroke of 11.30am with the kind of military efficiency you’d expect from the combined ranks of the Army, Navy and RAF.

Codenamed ‘Operation Precision’, some 300 personnel armed with shovels, picks and fatigues deployed onto the streets of Edinburgh, wave after wave of them targeting key areas.

At the Royal Hospital for Sick Children, where staff, patients and relatives have spent days struggling to cope with the conditions, the servicemen and women were greeted by clapping and cheering.

And while those involved at the cold face may have carried the odd bashful smile or been taken aback by the intense media interest in this first deployment of its kind, they soon warmed to their task.

In all around 200 soldiers from The Royal Scots Borderers, 1st Battalion The Royal Regiment of Scotland (1 SCOTS) travelled from Dreghorn Barracks to hospitals and doctors surgeries around the capital.

They were joined by 40 members of the RAF and 30 Navy personnel to ensure the most vulnerable people were left able to reach the services they need.

The move follows a bout of severe weather across the whole country, which has left some parts of Edinburgh buried by up to 30 inches of snow – the worst conditions to hit the city since 1963.

City of Edinburgh Council leader Jenny Dawe said that the decision to finally call in reinforcements was not taken lightly.

She said: “After the extreme snowfall on Monday of this week we decided we had to take action to make sure people in need of emergency help have access to it.

“This could be a life or death situation for some people in these circumstances and we have to make sure that ambulances are able to reach the most vulnerable.

“Those people who are in difficult to reach areas will also be a main focus.

“We also have 600 members of our own staff who are working hard to continually clear other roads around the city.” 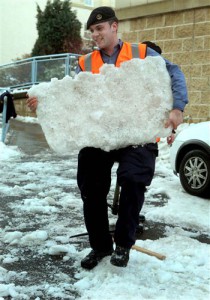 Edinburgh is the first and only local authority to use this tactic so far, and today (Thur) a team of around 50 members of the armed forces showed up to clear paths leading to the Royal Hospital for Sick Children.

They donned shovels and pick-axes to break up the heavily compacted ice and snow on both the footpaths and roads.

Ian Dunsmuir, 61, from Kirkliston, was visiting the hospital with his nine-year-old granddaughter Rebecca, who has spinobifida.

He said: “I think what they’re doing is fantastic, it’s a really positive thing to see.

“It means easier access to the hospital an as we have to be here regularly it will be a big help.

“I just wish more was being done in some of the more remote areas as I haven’t seen any of the roads being cleared out in Kirkliston or Newbridge, or Queensferry where my daughter lives.”

Squadron Leader Jason Aslett, from RAF Leuchars, said: “We are doing as much as we possibly can, this is the first time I have ever been called out to do something like this and I know all of the guys are happy to help.

The Army has also been assisting the Scottish Ambulance Service to provide four wheel drive Land Rovers to transport paramedics to vulnerable patients when ordinary ambulances are not able reach them.

Major David Goodacre, from 1 SCOTS, said: “We have spent the last few days driving ambulance crews to some of the more inaccessible areas.

“Now we are doing our best to clear the roads around hospitals, care homes and doctors’ surgeries.

“We are not taking over from the council, we’re just here to give them additional support where it’s needed, with a focus on access points at hospitals.

“We have just returned from six months in Afghanistan and we got such support from the public while we were away, that we are using this as an opportunity to give something back.”

Lieutenant Euan Duncan works on the HMS Illustrious, which is currently undergoing a refit in Rosyth, said: “I believe there are about 17 jobs for us to do around the city.

“It’s great to get out and do something a bit different to our everyday tasks.

“It has been nice building a bit of community spirit when everyone is feeling fed up of this weather.”

Councillor Dawe said the armed forces would continue to help out for several days and members of the Royal Marines Scotland Band are also on standby to help.

It was thought NHS North Lanarkshire are among other public bodies watching the Edinburgh operation with a view to seeking assistance.