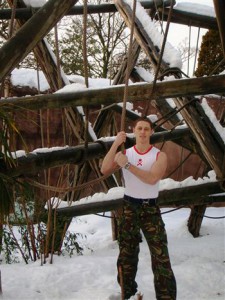 A ROYAL Marine who will attempt to climb the height of three Eiffel Towers to set a rope-climbing world record has been taking tips from chimps at Edinburgh Zoo.

Sergeant Sam Sheriff, a physical training instructor for the Marines, will climb a 30ft unknotted rope 100 times to raise cash for a military memorial garden at 45 Commando in Arbroath, Angus.

He visited the Budongo Trail at the zoo on Thursday to observe the chimps – who are expert climbers – to ensure he uses the right technique.

The 3,000ft charity climb will take place on a gymnasium rope at the 45 Commando base on Tuesday.

Sgt Sheriff said: “Rope climbing is something which all Royal Marines must be able to do in order to progress in Commando training.

“This ensures they have good upper body strength and are physically capable of any task which is asked of them.

“As a Royal Marines physical training instructor my job is to teach new recruits how to climb ropes, so I thought this would be a fitting challenge.

“I have never seen a fundraiser like this before and there is no world record for rope climbing endurance, so I thought I would see if I could set one at the same time.”

He is one of many Marines in his 800-strong unit to carry out various challenges in a bid to reach a £150,000 target for the Woodlands Garden Trust.

Sgt Sheriff, who did a six-m

onth tour of Afghanistan as a Corporal in 2008, said the garden would become “a focal point for remembrance and reflection”.

Since 2006 13 Royal Marines have been killed in action.

He said: “The idea is to have the memorial garden ready for when the lads return from Afghanistan.

“A lot of people in the unit are doing great things to raise money like long-distance running and helicopter parachute jumping.

“We want to strike the right balance between sadness and celebration and be an area for young children too, some of whom have lost their fathers.

Joanne Richardson, head keeper for the Budongo Trail, said: “Obviously the chimps in Budongo are expert climbers, especially when it comes to ropes.

“They can make it to the top of the 10ft ropes in their enclosure in seconds, but unlike us they are able to grip the rope with their hands and their feet, so they do have an advantage.

“Chimps’ bodies are perfect for climbing with long arms and incredible upper body strength, and when they are active they also use ropes in displays to one another.”

Sgt Sheriff is awaiting confirmation that his challenge can be officially recognised by Guinness World Records, and hopes to complete his assent in less than nine hours. 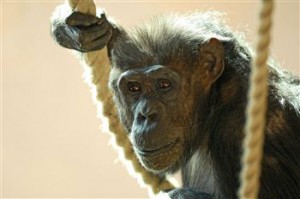 45 Commando have donated 70ft of ropes to Budongo Trail to thank the chimps at Edinburgh Zoo for their climbing tips.

Sgt Sheriff said: “I have been working hard to prepare for the challenge and perfect my climbing technique, and the chimps have given me some interesting tips.

“However, my technique will be more traditional than the chimps’ – my upper body strength is no match for theirs, so I will make the most of my legs to push me up the rope as well.”