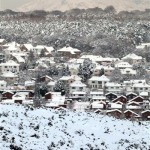 RETAIL chiefs and business leaders have told shoppers waiting for the next blast of winter weather to arrive this week: “Don’t panic”.

After the real Army rather than Dad’s Army took to the streets to help clear snow last week, fears of people stocking up on goods are high after shops and supermarkets ran out of daily essentials in some areas.

Some retailers have suspended online deliveries as temperatures are predicted to plummet to below freezing with up to 20cm of snow falling in some areas of the country on Thursday.

The Met Office have issued a severe weather warning for Thursday and Friday for most of the country including Dumfries and Galloway, Lothian and Borders, Highlands, Orkney and Shetland and Strathclyde.

Other forecasters say the snow could arrive in parts as early as Wednesday following two weeks of snow and freezing conditions which brought Scottish roads to a halt and saw fuel and food shortages.

But despite many stores running out of essentials like bread and milk last week, shoppers are being told that there is no need to worry.

A spokesman for Edinburgh Chamber of Commerce said: “Whilst individual stores have been short of something for a day or two, generally most stores have been alright. One store might not have had bread or coffee one day but they would have the following day.

“Overall stores have coped very well. The main thing that we have been doing is trying to engage with the Scottish Government to ensure that we can keep things moving.

“It’s about working together with the council and Bear and also the private sector including farmers and haulage companies.

“As long as people don’t panic buy and look after themselves then there is no need to get hot under the collar about it, if you can in this weather.

“We just need people to be sensible.”

A spokesman for the Scottish Government said that plans are in place for any more extreme weather.

He added: “The situation last week was that the food industry kept supplies running very well.

“There was short term issues were deliveries were getting delayed but the situation was helped with the extension of driver’s hours.

“Retail places have their own plans in place and that was experience in the past couple of weeks.

“Through our resilience process in the Scottish Government we obviously keep in touch with the industry. They do obviously have measures in place to ensure that they can supplies moving.

“Obviously we are keeping a very close eye on the weather forecast.”

A spokeswoman for the Scottish Retail Consortium said that the Arctic weather did provide challenges but that most shops coped well.

She added: “Undoubtedly it has had a big effect on retailers but we do have contingency plans.

“Shelves are stocked and people are going out to get their Christmas shopping.

“Stock levels are good within shops at the moment; they can deal with problems as they arise.

“We have always had our plans in place and if the weather changes, the plans will change.”

But many shoppers have been left fearing the worst as Tesco Direct and Sainsbury’s stopped taking orders through its website for Scotland.

A statement on the Tesco Direct website reads: “We apologise for any inconvenience, but unfortunately we are currently unable to take any new orders in Scotland and the Scottish Isles.

“This is due to the adverse weather conditions causing a build-up of orders. However, if you have already placed an order we will do our very best to deliver your items as soon as possible.”

Asda Direct also warned that it was unable to deliver large items, such as furniture, before Christmas.

And things aren’t set to get any better as a Met Office spokeswoman added that the weather could be as bad as last week.

She said: “It’s a possibility but we can’t be precise on where the snow actually falls. It does depend on which way the wind blows.

“The east may have the majority of snow and it looks like it is going to carry on all the way through next week and over Christmas and New Year. But it is too early to say whether it will snow on Christmas Day.”

A spokesman for the City of Edinburgh Council said: “We have a severe weather plan in place and our operations around the recent heavy snow are continuing.

“We are similarly prepared in the event of further severe weather. We have stocks of grit and salt and a priority system for clearing roads, we always aim to keep as many schools open as possible and we are very well placed to maintain community and care services.”