COUNCIL chiefs in Edinburgh say they have staff out in force ready to tackle the next expected bout of winter weather.

Forecasters have warned blizzards could strike anytime from tonight until the end of the week fuelled by 50mph winds – adding to the problems still suffered in some snow blighted areas.

Last week, around 450 to 600 millimetres of snow fell in the city with staff and contractors still out dealing with the affects of the bad weather.

City fathers say they have 600 staff, 20 mini-tractors, 23 other LGV Lorries, 100 other vehicles, 28 JCBs and 84 mechanical excavators and other equipment ready to take on teh arctic weather.

If snow falls overnight – there will be around 30 staff and 20 gritters working through the night and additional staff out from early morning keeping the main priority routes clear.

Lorries will also be on hand to transport snow away from the affected areas.

Depending on the severity and the amount of snow that falls, it is predicted that around 200 to 700 tonnes of salt will be used each day on the city’s roads and pavements.

Councillor Robert Aldridge, Environmental Leader, said: “Staff and contractors have been out on the ground, working day and night to deal with the snow since it started. We are still working hard and are well prepared for further bad weather.

“We have a good amount of salt in stock, vehicles and equipment ready for whatever weather comes our way. I would also encourage residents to follow the Council’s ‘Edinburgh Snow Code’ as part of preparations for the next spell of bad weather.”

Priority routes would be cleared first with additional mini-tractors are being used to clear pavements in the city centre and to try and keep the main shopping areas as clear as possible.

Police revealed that a 13-year-old boy fell through a frozen river in Edinburgh on Monday sparking warnings for people to take care,

The teenager was walking on the Union Canal around Wester Hailes at around 8pm when he plunged through the surface.

The boy was unhurt but police are reminding the public of the dangers of walking on frozen rivers and ponds at this time of year.

There have been a number of similar reports of children playing on the ice in the surrounding areas and police are worried that similar incidents might occur with more tragic circumstances.

A spokesman for Lothian and Borders Police said: “While it may be tempting at this time of year, playing on the ice can be extremely dangerous.

“While fortunately the boy involved in yesterday’s incident wasn’t injured, it highlights the dangers of playing or walking on the dangerous stretch of frozen water. 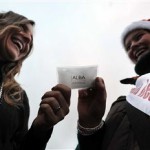 “With the potential for the weather to deteriorate as the week progresses, I would urge everyone who travels by foot or bicycle in the area to take extra caution.”

Meanwhile shivering commuters in Edinburgh received a welcome reprieve from the freezing weather today (Tues) thanks to one of the city’s leading letting agents.

More than a thousand disheartened commuters across the Capital were given some much-needed winter warmth in the shape of special hand warmers, which were provided by a team of property specialists from Alba Residential.

The six-strong Alba team made the generous offer to Edinburgh’s freezing workers as they emerged from trains at Haymarket station during the morning rush hour.

The team then proceeded along George Street and Festival Square and were greeted with hugs and kisses from freezing pedestrians who have bore the brunt of the heavy snow which has battered the country for over two weeks.

Callum MacGregor, Director at Alba Residential, said: “As the bad weather was showing no signs of letting up, we thought that we’d try and do our bit for the people of Edinburgh.

“The snow is making everyone so miserable at the moment, so we wanted to bring a little bit of Christmas cheer to the city.

“In years gone by we’ve given out change to motorists in the Capital to help with their parking costs, and this has always proved very popular. However, the weather is so bad that we couldn’t have done it this year as no one can even drive in and around the city.

“We also thought about giving out free coffee to commuters as a gesture, but that would have lasted for all of five minutes and people would just be freezing again. We wanted something that would last a little longer than that.

“It was our marketing manager Laura who came up with the hand-warmer gift idea, because she said that’s what she would appreciate if she was commuting in this weather.

“We all thought it was a great idea, and clearly the people of Edinburgh did too as these hand warmers have gone down a treat.”

The hand warmers are rectangular in shape and generate heat through the crystallisation of a super-saturated solution.  The innovative crystals are instantly heated when the user snaps a small metal disc which is buried deep within the pad.

Lucky commuters who managed to get their mitts on a pair of hand warmers will be able to use them time and again by placing the pads in boiling water whenever they feel a nip in the air – which should provide some well-needed relief right through the cold snap.

The gesture is the third giveaway that Alba Residential has carried out in Edinburgh in recent years. In 2008 the firm recruited a team of “meter maids” who provided motorists with money to pay for parking in the city centre.

The following year, Alba repeated the gesture but with a twist to satisfy the female half of the city – in a guise of a team of “meter hunks” who distributed change to pay for shoppers’ parking.