Delivery driver runs into burning house to save man’s life 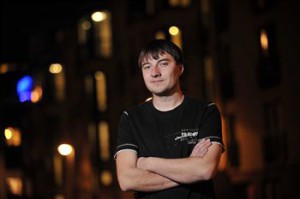 A DELIVERY driver who ran into a burning house and led an elderly man to safety said he’s no hero – because he would never had forgiven himself if someone had died.

Andrew Spouse, 26, has said he was “embarrassed” to be called a hero following the news that he will be nominated for an award for his bravery rescuing the pensioner yesterday morning in what he described as “an eventful day”.

Mr Spouse was delivering plumbing materials to a property in Wallyford, East Lothian, when he noticed the neighbouring house was on fire at 9am.

He said: “I saw the smoke pouring out of the upstairs but nobody seemed to have noticed.

“The windows were closed and the smoke was coming out of the gaps around the windows, doors and vents and coming out round his front door.

“It was billowing out.”

The brave driver was concerned that there may be someone inside and leapt into action.

He said: “I asked the lady next door if there was anybody living there she said there was an old man.

“The guy I was working with managed to kick it in.”

After his co-driver forced the door open, Andrew covered his mouth and nose and ventured into the thick smoke that had engulfed the house.

He said: “I had a thick hoodie on so I put that onto my face and made my way in.

“The smoke was so thick it was difficult to breathe so I made it to the window in the back bedroom and kicked the frame so I could get some air.

“I had to keep going back to the window to get air.  There was something blocking the door to the guy’s room, a cabinet or something.

“I couldn’t see anything and I didn’t know where he was and then I just felt his arm.

“I couldn’t believe he was still conscious, the smoke was so thick.  I was amazed.

“I went to take him to the stairs but he was too heavy and the smoke was too thick so I took him to the window in the back bedroom.  Then I heard the fire brigade so I just waited there with him.”

Three fire engines and 15 fire-fighters arrived to tackle the blaze and help the two men escape from the building by a ladder.

Initial reports suggest that the fire started on the mattress in the main from a cigarette or a match.

A spokesperson for Lothian and Borders Fire and Rescue Service said: “The actions of this man saved the occupant’s life.”

“When fire crews arrived the bedroom of the house was well alight.

“The delivery driver led the man to safety. “

The elderly man received oxygen from the fire crews at the scene and both men were taken by ambulance to the Royal Infirmary of Edinburgh.

Mr Spouse said that he only briefly saw the man – named locally as John Dunn – when they arrived at hospital.

He said: “We both got whisked away in the hospital.  He was wheeled one way and me the other.

“But he put his thumb up and said, “thanks mate.”

Graeme Sloan, 42, a heating engineer from Tranent, heard the smoke alarm when he arrived for work in the house next door but didn’t think anything of it.

He said: “I arrived this morning about quarter to eight.

“As soon as I came out my van I thought someone has burnt their toast and didn’t think anything of it.

“When I next came out the house there was smoke coming out the window next door.

“I phoned my work and my boss phoned the council.

“The delivery driver came and phoned the fire brigade. He knocked the door to get inside.

“He was off his head for going in there. You couldn’t see two feet in front of you because of all the black smoke. It was billowing out.

“Thankfully the fire brigade were here within about four minutes or it could have been a lot worse.

“The older guy just had on his t-shirt and his boxers when he came out.

“He had an oxygen mask on and he was just completely dazed.”

Graham Robertson, 34, a heating engineer from Kirkcaldy, Fife, said: “I was still in the house working when he was kicking the door in.

“There was a lot of smoke. As soon as the door was open you could see all of the smoke coming out.”

A next door neighbour said that he had heard about the fire at work but it was good to know “Jackie” was safe.

“I’m glad to hear he’s alright. He’s quiet and keeps himself to himself.

“He likes a wee tipple but has never caused me any bother.

“I don’t think that he has any family because his mum died a few years back.”

When asked about what drove him to make such a daring rescue Mr Spouse said: “I blame that on the adrenaline.

“It’s just one of those things, I just couldn’t do nothing about it.

“If there had been somebody in there and died and I did nothing, I wouldn’t have forgiven myself.”

Mr Spouse is now recovering at home from smoke inhalation.

He said: “I’m still feeling a little sick and it feels like I’m breathing dust.”