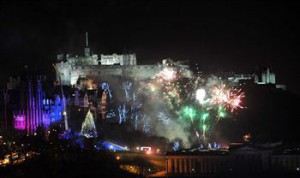 And it has been revealed that the £9 million spent illuminating towns and cities in the past three years could be used to provide 30 snowploughs.

Another £400,000 was spent on trees and decorations for council properties and thousands more on celebrity appearances at town centre switch-on ceremonies.

The figures come as local authorities are struggle to cope with the severe winter weather.

She said: “We all want to enjoy Christmas and put up a few decorations, but taxpayers shouldn’t be left with a bill running into millions at the end of it all.

“It’s unbelievable that festive spending peaked during the recession and costs must be kept under control from now on.

“With many councils now pleading poverty as they try to cut spending, there’s no excuse for going over the top this year.

“Christmas decorations don’t have to cost the earth.”

Council’s Christmas decoration spending hit a high in 2008 when officials spent £3.2 million on lights, trees and other decor.

In the years preceding and following that they spent more than £2.8 million – which is enough to pay the salaries of 130 new teachers or buy 30 snowploughs.

Most council’s said their budgets for this winter were similar to last year’s.

A spokesman for North Lanarkshire Council, which spent £352,000 on festive lights last year, said: “Unlike most local authorities, who install Christmas lights in one or two locations, North Lanarkshire has seven major towns.

“We also cover some 30 villages throughout the area. The average spend is £9500 per display which we believe is value for money and brings residents and visitors some festive cheer.”

A spokesman for the City of Edinburgh Council, which spent £149,000 on lights last year, said: “Christmas is a special time of year and there aren’t many cities that can match what Edinburgh has to offer over this period.

“The festive lights and other decorations are an important part of showcasing the fantastic sights and experiences for residents and visitors.”

Glasgow City Council spent £207,000 last year on lights. A spokesman said: “The Christmas attractions are a highlight on the Glasgow calendar while the city centre lights are well loved and help to generate business.”