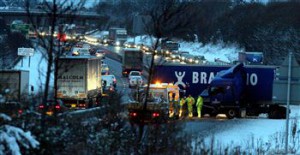 THE great Christmas getaway got off to a disastrous start today (Thu) after a lorry crashed on one of Scotland’s busiest roads, causing miles of tailbacks.

The early morning accident on the city bypass in Edinburgh caused rush-hour chaos with thousands of motorists stuck in a four miles of nose to tail traffic.

Across the UK, 14 million people are expected to take to the roads today. Many of them are trying to get home for Christmas, others need to do last-minute shopping, and some simply have  to get to work.

But the 6.20am accident near the Lothianburn junction effectively closed the eastbound carriageway for a time.

Police said the lorry hit the central reservation and slewed across both lanes. The 51-year-old driver needed hospital treatment for minor injuries.

Three hours later, eastbound traffic was still slow for more than four miles back to the junction with the A71.

Across Scotland, the number of cars on the roads was expected to peak later in the evening as even more people try to get home in time for Christmas or get out to grab last-minute bargains.

The delayed Christmas getaway created extra work for breakdown firms, who reported another busy day on Tuesday, with an estimated 21,000 call-outs. 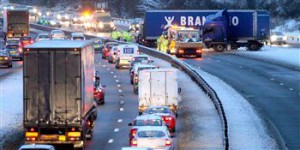 AA president Edmund King said drivers must remember to top up anti-freeze, put de-icer in their windscreen washers and drive on a full tank of petrol.

He said the roads would be very busy with Christmas shoppers as well as those travelling to visit relatives.

He said: “The roads in many parts of the country are treacherous.

“Conditions are not great because of the sub-zero temperatures so try not to brake too harshly and where possible stick to motorways and trunk roads.

“The day the majority of people stay at home is Christmas Day.

“Some 60 per cent say they won’t venture out at all.

“If people really are worried and get stuck in the traffic, maybe early in the morning on the 25th might be the time to travel.”