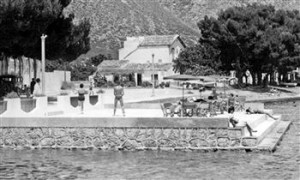 BACK in the 1960s package holidays were almost unheard of as British families opted for getaways closer to home.

But a Spanish hotel has unearthed a set of grainy photographs believed to show a group of Glaswegians who were the first foreign visitors in the summer of 1961.

The images, taken at the Sis Pins Hotel in Port de Pollença, Mallorca, show some of the Scottish tourists relaxing on a sun terrace opposite the hotel and sitting in the shade of the six pine trees, which gave the hotel its name.

And records at the hotel show that the group of cycling enthusiasts from Glasgow were the first foreign package holiday tourists to stay there.

Records detailing their addresses have been lost, but the hotel has their names and two pictures taken at the time, which refer to Scottish guests from Glasgow enjoying the sunshine.

Now bosses at the hotel – where Agatha Christie is believed to have stayed whilst writing the novel ‘Problem at Pollensa Bay’ – want the tourists to recount their memories of the holiday, as part of its 50th anniversary of hosting package holidaymakers.

And they have even offered them a free one-week holiday so they can join in the celebrations. 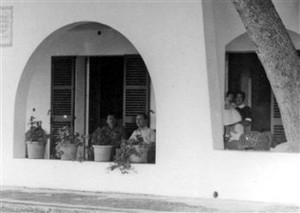 One of the hotel’s owners, Geoff Hopkins, from Blackpool, said that guest lists from 1961 indicated that a group of nine guests from the Glasgow area had flown in from Manchester Airport.

Mr Hopkins added: “Apparently, they were all cycling enthusiasts and did some cycling while they were here. In the years since their visit, Mallorca has obviously developed a wonderful reputation as a cycling holiday destination, so they were pioneers in that respect.

“Obviously, many of this group of friends will probably be in their 70s now, but the offer of a free one-week stay to recount their memories of the hotel at that time is there for them.  We hope they will be able to join us and enjoy the celebrations.

“I have a list of their names, so if anyone recognises any of the people on the photographs and can provide me with the names to match our records then I would love to hear from them.”

The Sis Pins, which opened its doors in 1952, is one of the most historical hotels in the area.

It has become a firm favourite for Scottish tourists and is also well known amongst painters, poets, writers and travellers from all over the world.

The old photographs were discovered during refurbishment work for the hotel’s new 700-seater CAPPUCCINO restaurant and bar, which will open next year to coincide with the anniversary.

The opening is part of a major expansion by the CAPPUCCINO Grand Café chain, which plans to set up 25 similar operations in the Middle East, North Africa and India, as well as further openings on the Spanish mainland.

It has been rated the number one hotel in Port de Pollença on holiday review site Tripadvisor.co.uk, even beating some of the four and five-star accommodation.

The Sis Pins is owned by a group of business people, including Geoff Hopkins and former Slumberland boss Peter Buckley.