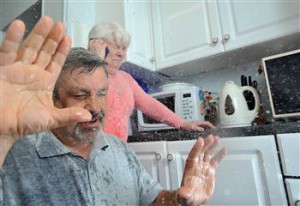 INSURANCE companies are facing a flood of claims for burst pipes totalling around £7 million a day as the winter thaw continues.

After weeks of sub-zero temperatures, widespread thaw has caused more than 2,000 pipes to burst in homes and businesses across Scotland.

Many properties have been left water damaged while households have also been left without water due to frozen mains pipes bursting.

A spokeswoman for the Association of British Insurers (ABI) said: “On average burst pipes are costing £7 million a day in the UK.

“This is obviously because everything is thawing out now.”

But the figure is expected to be much higher this year.

And Scottish Water has revealed that they received over 14,000 calls since Christmas Eve from customers seeking help.

That is more than four times the normal level for this time of year.

Peter Farrer, Scottish Water’s customer service delivery director, said: “We are dealing with extremely high levels of calls. Our Customer Helpline in Edinburgh and our back up call centre together with our field teams are working at full capacity.

“Many of our calls are from households affected by frozen pipes or bursts in their homes.  When they call with an internal problem we offer them advice on how to get a plumber or helpful hints on our dedicated webpage at www.scottishwater/warmpipes.

“If we are unsure if this is an internal issue with the household, or an issue with our assets, or both we then send a field technician out to the customer’s premises to assist.

“We are aware that we may be taking longer to answer some calls or respond to appeals for help.

“For this we apologise and thank our customers for their patience as we work to deal with all these issues.

“During the freezing temperatures the majority of calls are about frozen pipes. However, as the temperatures rise and the thaw takes hold this is when there is a heightened risk of burst pipes that affect both our customers’ water connections and our pipe network.

“Our team know it’s a 24-7 business and all our staff know how important it is for customers to be able to get through to us when they call.

“It may however take longer to answer calls during such extreme conditions, when our Customer Helpline is very busy. We would ask customers to remain patient with us during such times.

“Across the business our staff are tackling issues and prioritising the most crucial work first.”

Lothian and Borders Fire Service have recorded a number of calls from burst pipes but have said that there is not a lot they can do, especially if the water is coming from the flat above.

They attended on incident in Bathgate on Monday night where a smoke alarm was activated by a burst pipe and the crew assisted in soaking up water.

A spokeswoman said: “We have had quite a few flooding calls but most have been from the flat above and in that instance we would ask them to contact the council or a plumber.

“It is just a case of people trying to do what they can to prevent it in the first place.”

Any bursts or leaks on the public network can be reported by calling the Scottish Water Customer Helpline on 0845 601 8855.

Information on protecting pipes and short films showing practical advice such as how to locate your stop valve can be viewed on www.scottishwater.co.uk/warmpipes