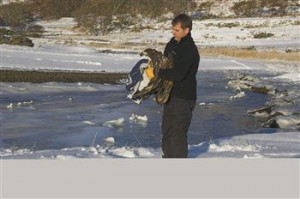 A baby sea eagle that had broken its leg and wing in a suspected crash landing while learning to fly has been reunited with its mum and dad.

The Scottish SPCA and RSPB Scotland released the eagle back to its home on Mull on December 22 after it made a full recovery in Fife.

The white-tailed eagle was taken to the Scottish SPCA’s Wildlife Rescue Centre in Fife after a farmer discovered the bird struggling on the ground back in September.

Colin Seddon, manager of the facility in Fife, said: “This eagle is an inexperienced youngster who probably injured himself by trying to land and tumbling from a tree. Luckily his injuries were healing naturally so we kept contact to a minimum and allowed nature to take its course.”

There was concern that the youngster would not be accepted back by his family, having been away for three months, but rescuers were pleased to report a happy reunion.

Mr Seddon said: “To our amazement, after about half an hour sitting on a shingle beach he was joined by his mother, who we identified via her wing tags.

“There was a real chance that she’d have tried to chase him off. However, they communicated with each other, sat together for a while and then the mother flew away.

“The following day they were joined at the release site by the father and again there was no squabbling.

“The eagle is fitted with a radio transmitter and colour rings so the RSPB on Mull can monitor him.

“Food is being put out for him for a short time and we’ve seen him feed, which is very encouraging.

“Wildlife rehabilitation is a major part of the Scottish SPCA’s work and we were delighted to be able to provide our expertise to help return such a beautiful bird to the wild.”

Dave Sexton, RSPB Scotland’s Mull Officer, said, “It’s been touch and go for this young eagle and although it’s early days since his release we’re delighted that he’s recovered. Now it’s up to him, we’ve done all we can.

“It could have been a very different story were it not for a real team effort from the Mull farmer who found him, the Scottish SPCA and the estate who welcomed him back.

“Every chick is precious and we want to return these magnificent birds back to Scotland’s skies so we’re extremely grateful for everyone’s efforts.

“To see what was once a badly injured eagle reunited with its mother after three months away brought a tear to the eye of those watching. It was a heart warming and touching sight.”

White-tailed eagles are being reintroduced to Scotland as part of the Sea Eagle Project, a partnership involving RSPB Scotland, Scottish Natural Heritage and Forestry Commission Scotland.