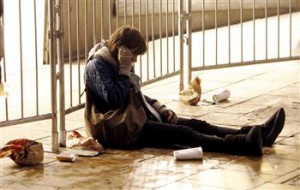 HOGMANAY hangovers are sure to be a common experience for many Scots party goers waking up on January 1, 2011.

But the age old question remains, what is the best way to combat that grim morning after the night before feeling?

Tried and trusted remedies range from a greasy breakfast, a bag of crisps or the Scottish favourite, Irn Bru.

However, in reality prevention starts the night before and revellers have been asked to ponder carefully about what alcohol they drink rather than how much.

Chris Sorek, Chief Executive of alcohol awareness charity Drinkaware said: “The start of a new year is an exciting time and a great reason to celebrate, which can often involve alcohol.

“There’s always pressure to have fun on New Year’s Eve and sometimes this means we drink more than we intend to. But waking up on the 1st January with a headache and not being able to remember the night before won’t be a great start to 2011.

“By following some simple tips like eating a meal beforehand, alternating alcoholic drinks with soft drinks or water and planning a safe journey home, you can ensure this New Year’s Eve is one to remember.”

He said: “I drink real ale because I like the drink not to get drunk.

“Drinking is about the experience and real ale is part of that.  It’s about meeting friends and enjoying the beer.

“At New Year, yes people do tend to drink more that’s because they are being more sociable.

“Also, if it’s got a low alcohol content it means that you can drink more of it and appreciate the taste without getting drunk.

“The only way to avoid a hangover is to take your time over it (your drink), savour it and appreciate the quality, not by downing pints and getting drunk.”

“Certain drinks have a reputation for giving people a hangover and actually real ale is not one of them.”

One Scottish based wine merchant has said that the secret is down to what is consumed rather than the volume.

Operations Director Russell Wallace, explained: “There are hundreds of old wives tales which Scots as a nation look to when trying to cure a hangover.

“While these, to some extent help a hangover, I am sure many will agree that they are definitely not a cure.

“However I have found a hangover deterrent that actually works. Quite simply, you should buy wines which are sourced directly from the vineyard and not the brand names you’re used to in your local supermarket.

Mr Wallace recommends a wine low in sulphates, this makes the drink less toxic to your body, ‘which means good-by hangover’.

He added: “I suggest that if you want to avoid the hangover before you even start drinking, think about your purchase.”

However, wine for many revellers will not be their drink of choice.  A common favourite is beer and it would appear that drinking real ale rather than lager may help stifle the hangover.

Another believer in quality not quantity is Sebastiano Ingaliso of the wine bar Divino Enoteca in Edinburgh where the maximum wine measure is 175ml rather than the commercial norm of 25oml.

He said: “We firmly believe that wine should be enjoyed and savoured rather than drank as a means to get drunk.

“This is why we only offer a maximum of 175ml servings, as it enables our customers to experience the quality of the wine, without being too drunk to notice the complexities and flavours of the vintage they are trying.”

But if it has all proven too much, there are cures from around the world to consider.

Eat a bag of skips.  Some say the flavour of the snack help combat smelly breath and while the salts in the food help perk up energy levels

A more gung-ho approach is to start drinking again … perhaps a firecracker –  a shot glass with half tequila, half tabasco sauce.

A firm favourite with the Scots is a can of pop, specifically, Irn Bru.

Or a more labour intensive option is to head to the kitchen and stir fry broccoli with soy sauce.  It’s salty, crunchy, fresh, healthy.

How about boiled tripe?  Apparently is a traditional hangover cure in Mexico.

Or perhaps, a hair of the dog?