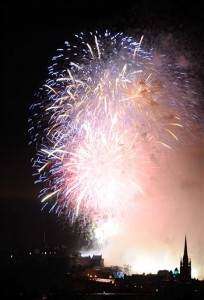 HOGMANAY celebrations have given Scotland a £45 million boost to start the New Year.

Street parties and events across the country attracted people from all over the globe.

The word-famous Edinburgh Street Party saw 80,000 revellers from home and abroad see in the New Year on Princes Street and is expected to generate around £30 million.

A further billion strong audience in more than 150 countries was expected to watch the illuminating fireworks display against the backdrop of Edinburgh Castle.

While Glasgow’s bash in George Square is thought to have brought in £10million for local businesses.

Tourism to other towns and cities across Scotland is expected to add at least a further £5 million to the nation’s economy.

It was a night of joy and relief for Hogmanay party organisers, who had feared the worst winter in 45 years would ruin their plans.

Pete Irvine, Edinburgh’s Hogmanay organiser, said: “This is unquestionably one of the best Street Parties we’ve had.

“The weather was kind, and we’ve welcomed tens of thousands of good natured revellers from around the world to the home of Hogmanay.

“Britain’s number one band of the moment, Biffy Clyro, were exactly right and the atmosphere leading up to the Bells was electric.”

VisitScotland’s busiest information centre, on Princes Street, had around 6000 visitors, with staff reporting an increase in arrivals from China, India, Germany and England.

Many of the tourists joined the Hogmanay crowds at the Street Party, Concert in the Gardens and The Keilidh.

Assistant Chief Constable Mike McCormick of Lothian and Borders Police, who was in charge of the Hogmanay police operation, said: “Once again the revellers in Edinburgh impressed us with their behaviour and attitude.

“Only one arrest was made by our officers at the event, and we would like to thank everyone there for helping create a fun, safe atmosphere to welcome in 2011.”

The massive post-party clean-up also ran smoothly, with 45 workers collecting 75 tons of rubbish between 2am and 5am.

Edinburgh city councillor Steve Cardownie added: “Yet again, our inspiring capital has shown the world how to party.”

And Edinburgh’s celebrations ran into Saturday as 1000 participants ran the One O’clock Run and a further 1000 braved the chilly water of the Firth of Forth to take part in the Loony Dook at Queensferry.

Lord Provost George Grubb said: “As a local councillor for South Queensferry, I have braved many a bitter New Year’s Day to witness – and, on two occasions, join – the hardy souls plunging into the Forth for the Loony Dook.

“Well done to all who took part. It is a great event with a terrific atmosphere and I am delighted it was part of the official Edinburgh’s Hogmanay programme this year.”

To close the day KT Tunstall celebrated One Day with a Resolution Concert in West Princes Street Gardens where she was joined by King Creosote, Kassidy and Silver Columns.

Glasgow’s Hogmanay bosses were also celebrating after a last-minute rush of revellers to George Square on Hogmanay.

A spokesman for organisers Glasgow Life said the better weather had helped bring out the punters.

He added: “We’re delighted that all 5000 tickets were snapped up.”

Scott Taylor, chief executive of Glasgow City Marketing Bureau, said: “We were in a panic three days before Hogmanay.

“But as soon as people saw the favourable forecast, they decided to come in their thousands.”

VisitScotland chief executive Malcolm Roughead said: “Scotland has shown yet again that it is the best place to be for New Year.”