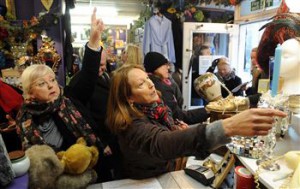 And the frenzy of enthusiasm today (mon) suggested they would most likely do well for the charity again this time around.

Peter Jew, manager of the Stockbridge store, said: “To my knowledge no other charity shop in Scotland has ever made that much in one week.

“I think it is a lot to do with the profile of the area – we are generally always busy, I think we’re the busiest charity shop in the country.

“This isn’t a sale of our cheapest items, but of the best.

“I expect the vintage jewelry and hats will be our biggest sellers, and designer clothes.”

With the windows tissue-papered to keep the treasures inside hidden, people lined up in anticipation, and were treated to complimentary festive sausage rolls to ease the wait. 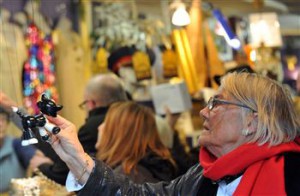 Ann Richards, a tai chi and meditation teacher from Stockbridge, said: “I’m a regular customer of this shop and I come along to this sale every year.

“The queuing is all part of the atmosphere.

“It feels like a bit of a reward for us regulars.”

But Ms Richards was being coy about the particular items she was hoping to find, she said: “I’m not telling – it’s a secret in case anyone else goes after the same thing.”

Ida Thompson, a designer from Newington, said: “I think what’s really special about this shop is that Pete really cares about his customers, he knows the types of things we’re looking for.”

And as the clock grew closer to opening the tissue paper was ripped down to allow a sneak peak five minutes before the shop opened.

A Dior bracelet was first to go, followed by a vintage leather jacket, an antique clock and a blue kimono.

And as the packed out shop reached its limit, so did the temperament of some of the customers, with two women arguing over who had their hand on a dress first and others pushing past one another to grab the item in their sights.

But as the buyers left, satisfied though slightly ruffled, they showed off their goods from a successful shopping trip. 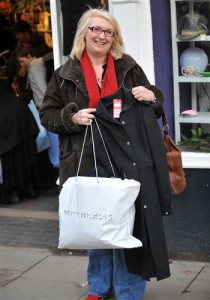 Diane Mackay, from Edinburgh, said: “I got this really special Prada coat for my daughter, it’s gorgeous.

“I’m so pleased I found it, I’m sure if I’d come any later it wouldn’t have still been here.”

Phil Ward, 71, retired, came from Polwarth on the other side of the city to bag himself a bargain, taking home a vinyl copy of the Beatles’ double EP The Magical Mystery Tour.

He said: “The Beatles’ stuff is pretty expensive now, I actually thought it was 5 but when I got to the till I realised it was 25.

And Kate Keohane, 17, a student from Stockbridge, said: “I picked up a picture for my mum’s classroom as she is a teacher.

“It is pretty good fun this, hunting for bargains.”

Shelter Scotland’s Forrest Road shop will follow suit with its own sale on January 7, where a vintage Lanvin cape and a beaded 1920s dress will be among the highlights.

Shelter is a charity that works to alleviate the distress caused by homelessness and bad housing in Scotland.