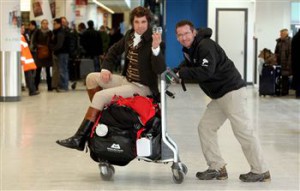 Just for once, he needn’t worry about the Michelin inspectors.

One of Scotland’s top chefs – and a high-altitude haggis – are heading to Africa in a bid to cook the world’s highest Burns supper.

Andrew Fairlie, who has two Michelin stars, will be joined on the trip to Mount Kilimanjaro by 19 other climbers, including comedian Fred MacAuley.

The charity expedition aims to raise £150,000 towards training Scotland’s chefs of the future.

For the Burns supper – which will be held as close to the 19,000ft summit as possible – a special haggis has been created.

Andrew said: “We have lowered the meat content because we will not get it to boiling point at that altitude.

“We can’t do the supper at the very top because it is too windy so we will do it as a last supper before going to the top.”

Andrew added: “I have done quite a bit of hill walking – I find it the best way to relax after being stuck in a hot kitchen. But I have never done anything like this. I used to work in Tanzania and always wanted to climb Kilimanjaro but never got round to it.

“I’ve not done as much preparation as I should have. I’ve climbed a couple of Scottish mountains and done a couple of weeks in the gym.”

Andrew said he had raised money for the Hospitality Industry Trust (HIT) over the past five years.

He said: “We wanted to show emerging talent that we do take their training seriously, that we are putting our money where our mouth is.”

The team expects to take eight days to reach their goal, reaching the summit of Kilimanjaro on January 15.

As well as Fairlie and MacAuley,  Edinburgh Restaurateur James is also a member of the expedition.

During the supper, piper and climber Billy Bell will play in the Haggis, which has been created by Perthshire butcher Simon Howie, one of the main sponsors of the climb.

HIT works with colleges and universities to provide scholarships for talented people working in the food industry.

Chief executive David Cochrane, who is also going on the climb, said: “The training is has gone well but there is only so much preparation you can do. It will be a difficult challenge but the whole team is excited and proud about but taking Burns supper to the top of one of the world’s highest peaks.”