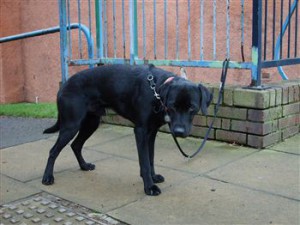 ANIMAL cruelty investigators say they’re mystified by the abandonment of a well-cared for black Labrador in a tough housing scheme on Hogmanay.

The pooch – named Larry by rescuers – was tied to a fence and left to freeze to death.

Larry shivered in temperatures barely above freezing for at least 10 hours before a concerned passer by finally called the Scottish SPCA.

Senior Inspector Jenny Scott said the incident in Craigmillar, Edinburgh, had left them stumped as Larry appeared to have been well cared for.

She said: “A local resident said they had seen the dog tied up just after midnight whilst first footing but assumed someone was coming back for it that night.

“When I collected him, he had been outside for at least 10 hours.”

Abandoning an animal is an offence and anyone found guilty of doing so can be banned from keeping animals for life.

Inspector Scott said: “It’s a strange case as the dog is in good condition and we originally thought someone might have tied him up and forgotten about him but no one has come forward to claim him.

“He is black with a white stripe on his chest and is between three and four years old.

“He was wearing a red leather-looking collar with silver metal tags on it.

“We hope someone will recognise him and help us track down his owner.”

Larry is currently being cared for at the charity’s rescue and re-homing centre in Balerno, Edinburgh, and anyone who recognises the dog should contact the SSPCA animal helpline on 03000 999 999.