COUNCIL chiefs have been condemned for planning to spend more than half a million pounds on taxi trips while slashing services elsewhere. 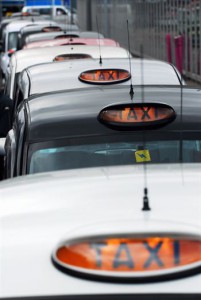 cil is asking cab firms to bid for a contract to ferry officials and councillors around the city.

They admit the contract will be worth in the region of £520,000 over four years.

The bureaucrats are expected to make 11,375 taxi trips a year, which averages out at more than five-and-a-half trips an hour during council opening times.

At the same time, official figures reveal that a plan to get councillors and officials on their bikes is flopping.

Critics of the taxi splurge said today (Thu) there was no justification for using so many cab journeys in such hard economic times. The city is planning to slash its budget by £90m over the next three years.

The spending scandal is revealed in bid documents which show that Edinburgh’s total taxi bill for the next four years is expected to be £4m.

More than £2.1m will be spent on transporting “health and social care clients…to and from day centres and activities”.

A further £1.36m will go on “children and family clients” travelling to and from “school and activities”.

The remaining £520,000, admits the council, will be spent on council staff travelling by cab between offices.

The decision to spend so much money on cabs is all the more controversial because bicycle use by council staff has sharply declined in the past year.

“Despite efforts, it has not been possible to explain precisely the reduction,” says the report. Possible explanations include bad weather and a difficult system for claiming back the costs of cycle travel.

The same report shows that bureaucrats still travel vast distances by car every year. More than 11 million miles of travel in fleet and private vehicles were chalked up by Edinburgh Council employees in 2009/10.

The same staff managed only 216,000 miles by bus over the same period.

Charlotte Linacre, Campaign Manager at pressure group the TaxPayers’ Alliance said: “These figures show Edinburgh council can do much more to keep costs down.

“In some cases taxi rides are unavoidable, but far too much is being spent on the luxury of convenience while cheaper options are available.

“It sends the wrong message when councils are claiming to be cash strapped but treat taxis as a perk, whizzing by taxpayers who ultimately pay for their ride. Council officials should curb spending by using the pavement and public transport whenever possible.”

Friends of the Earth Scotland called on councillors and staff to get out of cabs and on to bikes and buses.

A spokeswoman said: “This sounds like a vast sum of money and I am sure they could cut that sum a lot. Times are tight and if they could go on the bus they would be saving money as well and the public would appreciate that.”

She added: “All public bodies should set a good example in tackling climate change.”

A spokesman for the council said that the £4m value of the entire contract was only a guide based on previous expenditure.

In terms of taxi trips for councillors and officials he added: “This only relates to one in eight taxi trips.”

Akela Group builds on success with north of England expansion