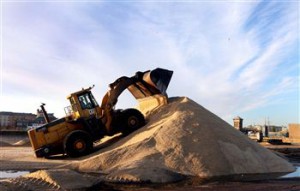 It will also be used to top up the national reserve stock, held centrally for those local authorities in particular need.

Keith Brown, Transport Minister, said Scotland was now “well prepared” after the backlash faced last month, when the Scottish Government was accused of being unprepared as the country’s road networks were thrown into chaos.

He said there were lessons to be learned from the incident and that measures had to put in place to ensure it did not happen again.

He said: “We have learned from what happened last month and are making sure we do everything we can to keep Scotland moving if the snow hits again.

“What we have to remember is that we’re not in Norway or Canada where you can predict it.

“Across Scotland we have some 533,000 tonnes in stock and on order compared to the 417,000 tonnes used for the last three months up to December 31, thanks to our resilience planning, with more stocks arriving this coming week.

“We are therefore confident that out resilience planning will ensure that we get through the winter together, and keep Scotland moving.”

Salt delivered at the beginning of December was supposed to be a strategic stock but was used almost immediately as the severe weather conditions arrived earlier than usual.

A spokesman for the Scottish Conservative party said: “There is no doubt that salt stocks were dangerously low in many places before Christmas.

“The SNP Government learned a hard lesson but it was a lesson they had to learn for the sake of the country.”