By Amanda MacMillan and Clare Carswell

A SCOTTISH university has scrapped a degree in banking because of lack of interest from students. 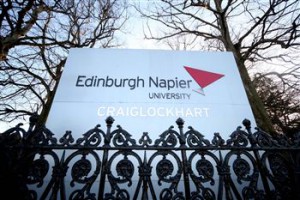 Napier University started its MSc in professional banking in 2009 but, after attracting only a handful of students, admitted it had pulled the plug on this year’s course.

The Edinburgh institution said the degree, which it ran together with the Chartered Institute of Bankers in Scotland (CIOBS), had been cancelled.

The one-year, full-time course was aimed at propelling ambitious bank workers up the corporate ladder.

Despite the intention of creating a new generation of Sir Fred Goodwins, the course fees were a relatively affordable £2,250.

Napier hoped to attract as many as 30 students a year to the course but it soon became apparent that was about as likely as Fred the Shred losing his Knighthood.

Only eight financial wizards signed up for last year’s “pilot” course, meaning even a student banker could work out it was not economically viable.

A spokesman for the university said last year’s crop of students had found the course “extremely interesting and rewarding”.

But he added: “For every postgraduate programme we offer, we need a certain number of students to make the course economically viable. “

The university is working with CIOBS to see if it is possible to relaunch the course this autumn, said the spokesman.

Napier was rated the city’s top university for graduate employability by the Higher Education Statistics Agency in 2010.

But Simon Thompson, chief executive of CIOBS, appeared to blame Napier University – rather than the reputation of the industry – for the lack of interest in the course.

He said: “Napier has not been successful in advertising the course. The difficulty with Napier is that they have no track record with that subject area.

“As an institute we had a record number of students. I suspect that Napier’s resources are focused elsewhere.”

A spokesman for the British Bankers’ Association insisted that despite the financial crisis and problems at Napier, there was still huge interest in the banking profession.

He added: “There are banking courses that are still seeing a steady stream of applicants coming through. Around 426,000 people are directly employed in banking across the UK.

“The UK banking industry continues to employ thousands of people so certainly it continues to be a sizeable industry.”

Marc O’Donnell, a consultant with recruitment firm Search questioned whether it was even necessary to have the Napier course.

He said: “To get into banking there is accountancy, actuary, financial services or even applied maths. In terms of having a banking degree, I’m not sure it is entirely relevant. It may not mean as much as other well-rounded courses.”

The banking crisis was particularly embarrassing for Scotland’s financial sector with both RBS and Bank of Scotland among the institutions needing taxpayer bail-outs to stay afloat.

In 2007, a year before the meltdown, the then RBS boss, Sir Fred Goodwin, pocketed a salary of £4.2 million.

Although they never rode high in the popularity stakes, bankers have become one of the most derided groups in society and increasingly in the sights of comics and commentators.

Last night, Scottish stand-up Vladimir McTavish weighed in on the demise of the Napier course.

He said: “The course was called professional banking?  What? As opposed to amateur banking?  Well, I suppose it was amateur what went before.

“Presumably the people taking this course found it hard to admit.  How could they face their parents and tell them what they had done?  They’d have to cover it up with having a job as a stripper.”

“You find that it’s not necessarily comedy gold but more that people laugh because there’s not much else they can do.”

The issue of bankers’ bonuses continues to grab the headlines. Last week it was claimed the government is “resigned” to UK banks handing out billions in bonuses to executives, despite the financial meltdown.

And in a bid to avoid further controversy over bonuses, there is evidence some banks are simply increasing salaries, in some cases by as much as 40%.