HUNDREDS of people have been left without a dentist after a ferocious blaze destroyed a surgery in Edinburgh.

Owner David Gilchrist said he was forced to turn away 40 patients scheduled for treatment at the Newington surgery yesterday (wed) alone after it was gutted by flames and smoke on Tuesday night.

He couldn’t even contact them in advance because all records were held on computer systems wiped out by the fire. 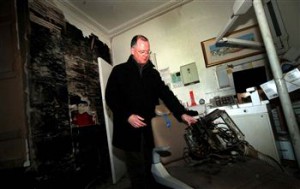 Now, because he is fully booked until the end of March, he is desperately seeking an alternative venue so as not to let his hundreds of patients down.

More than 40 fire-fighters worked to tackle the blaze that broke out in the basement area of number four Rankeillor Street at around 11pm on Tuesday night.

The fire affected homes on the street as well as the dental practice and properties on Clerk Street.

Three adults and a child were rescued by fire fighters using turntable ladders at the height of the blaze.

While some 12 people were treated by the ambulance service for smoke inhalation.

Two of the people rescued had to be taken to the Royal Infirmary of Edinburgh to be treated for the affects of smoke.

Surveying the damage, a grim faced Mr Gilchrist said: “As soon as I got the phone call and heard the word fire, I knew it was going to be bad.

“When we arrived here turntables had been used to rescue people.

“Lots of firemen, I think someone counted 40, were all working very hard.

“I didn’t see any flames it was just smoke. It was all very fast.

“We don’t know how much damage it has caused – things are all burnt.

“The problem is we are an NHS practice and we run with 40 plus patients a day plus emergency patients.

“We have an auxiliary surgery at the front which we are hopefully going to try and adapt.

“But I’m going to contact the Edinburgh Dental Institute to see if they have a spare surgery and see if we can move our surgeries in there so we can cope with the needs of the patients.

“This is a very real problem, we don’t know how we’re going to look after them.”

Mr Gilchrist, 54, has owned the practice for 10 years and has worked there for 15.

He estimated that there could be around £100,000 worth of damage to the property.

It is thought that the fire may have been started accidently by some tramps who regularly find their way into the basement to sleep.

Mr Gilchrist added: “They is a bunch of tramps, vagrants who have been moving from one place to another.

“They pitch up every so often.

“There is a problem with the entry systems to the flats as people just let anyone in.

“The police have been fantastic, they moved them along.

“But they basically live here as we have found blankets and mattresses.

“There doesn’t seem to be anywhere for these guys to go, maybe we have got an issue here I don’t know.”

The extent of the damage could be seen in the basement as all of the main water pipes were twisted and contorted from the flames.

In the dental practice, two surgical rooms have been affected by the blaze with walls and floors charred and ruined.

Many dental patients were showing up on Wednesday morning unaware that the surgery had been involved in a fire.

John Douglas, 46, hadn’t been to the dentist in over 20 years and had psyched himself up to get two cracked teeth removed.

He said: “I’m a bit gutted that now it has prolonged. I took a friend along to hold my hand.

“They are going to phone me so hopefully I will get an emergency appointment.”

Lucia Renzi, 59, had been going to the dentist to get a hole in her tooth filled.

She said: “I was eager to get treatment today. It doesn’t hurt just now but I am worried if something gets into the tooth it will be painful.”

Lesley Hiddleston, 42, was only showing up for her regular check-up but is worried in case something does happen with her teeth.

She said: “I booked my appointment about five weeks ago. I get them checked regularly but now I am just going to have to persevere.

“If anything goes wrong in the meantime I will have to go to the dental hospital.”

David Lockhart, Community Safety Manager at Lothian and Borders Fire and Rescue Service said: “This highlights the need for residents living in tenement buildings to be aware of the storage of items within their common stair which could be set on fire.

“Make sure that common stairs are keep clear from rubbish or any items which may block an escape route in an emergency.

“It’s also vital that people have a plan of what to do if they discover a fire in their home or stair.”

Police said it was too early to say what may have started the blaze.