THE new chief executive of Scotland’s second largest council says all of the country’s local authorities are in for a difficult year – and warned staff may have to go to help balance the books.

Sue Bruce, who was put in charge of The City of Edinburgh Council last week, said the only way to tackle rising 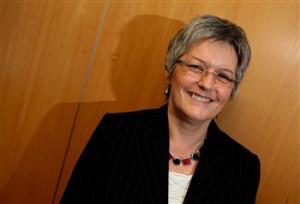 debt is to continue with budget cuts across the public sector – and warned that axing staff could play a prominent role.

Scotland’s local authorities are drowning in a debt estimated at more than £9bn, with Edinburgh shouldering £1.2bn of that and Glasgow facing up to £1.4bn.

Ms Bruce said her organisation is bound to face similar problems to local authorities across the country.

She said: “Edinburgh Council has been very well run so far, but it is facing up to the same challenges as everyone else.

“The situation is similar to that being faced by other councils in Scotland and this year is likely to be difficult for most local authorities.

“Right across the public sector we are working within our financial circumstances.

“We will have to continue to look at productivity and effectiveness of the council – and the role members of staff play.”

Ms Bruce – who left the same role at Aberdeen City Council to become Edinburgh’s chief executive – said Edinburgh’s importance to the whole of Scotland and the rest of the world will be the driving force behind “sorting things out”.

She said: “Edinburgh is a beautiful city – there is so much history and culture here – which makes it hugely important in bringing tourism to Scotland.

“It is also a really vibrant city which has countless festivals all year round, all of which play a vital role for Scotland’s economy.

“Obviously as a capital city we will work hard to balance difficult demands and I feel fully prepared to do that, the council I have taken over was well run before I got here.

Ms Bruce has bought a house in the north of Edinburgh and says she thinks it is one of the most beautiful cities in the world.

She: “I was very pleased to be offered the job in Edinburgh.

“It is the capital city and, in my opinion, is the top job in local government.”