Transsexual traffic warden claims she was bullied out of job 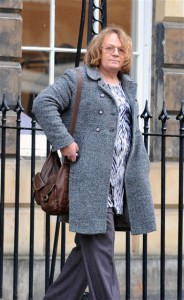 A SEX SWAP traffic warden is taking legal action against a Scottish police force, claiming she was bullied out of her job.

Jan Irvine, 57, from Edinburgh, claims her line managers at Lothian and Borders Police victimised and harassed her when she started wearing women’s clothes and make-up to work.

Ms Irvine – formerly known as ‘Ian’ – had a sex-change operation in 2004, whilst working as a traffic warden.

At the time, Lothian and Borders Police proudly paraded Ms Irvine as proof of their enlightened attitude towards equality.

But after an alleged string of bullying incidents, she is now suing the force for unfair dismissal on the ground of sex discrimination.

Ms Irvine switched jobs to work in the force’s control centre but resigned on 31 December 2009.

At an employment tribunal in Edinburgh today (Thur), Ms Irvine Ms Irvine said: “I had been off sick with stress; the whole situation had a detrimental effect on my mental health.

“The morning I went in to resign I felt like a huge weight had been lifted from my shoulders.”

She claimed her supervisor, Nicola Boyd, and inspector Sergeant Andrew Sedgwick had put together a “secret dossier” of emails and memos about her.

She also alleged the pair did not support her when she went for a job as a mediator within the police force and said they showed her no respect.

At the hearing, Ms Irvine – who represented herself – said: “For 48 years I lived with something inside me and I finally started to recognise the person looking back at me.

“I was always taught to treat people with respect, but respect works in both ways and has to be earned – I felt as though I was not acknowledged by my two supervisors when I was out working on the ‘shop floor’.”

The final straw, according to Ms Irvine, came when her bosses decided to review her competence for the job.

The review was ordered after Ms Irvine reportedly failed to take down adequate details while on a phone call.

Almost three weeks before her resignation, Ms Irvine met with Inspector Gillian Kerr, who was next in command as her line manager.

She said she raised her issues with Inspector Kerr in December 2009, but asked for no notes to be taken.

Ms Irvine opted for a formal grievance procedure but resigned her post before it could be heard.

Inspector Kerr told the tribunal she was shocked when Ms Irvine told her she would be leaving her post, and tried to discuss her options with her again.

She said: “I wanted to make sure this was definitely what she wanted, but she was adamant about leaving.”

It emerged today that Ms Irvine’s case could be time-barred. Employment Judge Susan Craig said she had to decide whether or not the claim was out of time, as the allegations of victimisation stretched back as far as 2000.

In 2004, Lothian and Borders police has became the first force in Scotland to introduce guidelines for the employment of transsexual officers.

It published details of employment rights and policy for officers who have undergone sex-change operations.

The force agreed to provide up to two years’ paid leave for serving officers to undergo hormone replacement therapy and a full sex-change operation.

At the time, Chief Inspector David Lyle of the Lothian and Borders police, a spokesman for the Gay Police Association said: “In the past transsexual people were unlikely to be recruited.

“That is now changing because the idea is that we will judge every applicant on their own merits.”

Ironically, Ms Irvine described the move at the time as “very positive” and said she hoped “other forces will follow suit”.

She added: “If you’re in the minority when you go to work you always give 110 per cent. I feel that gender doesn’t matter, people don’t care when you wear a uniform providing you do the job and do it right.”

Employment Judge Craig said she would issue both parties a written notification of her judgment in four to six weeks.

Bug Infested Edinburgh Flat Was Among Worst Ever Seen