Deadline News
Home Multimedia Videos Breakdancing Mum
Facebook
Twitter
Pinterest
WhatsApp
A BREAKDANCING mum has won her way through to the next round of a TV talent competition despite only going along to support her daughter.
Nancy McAndrew, 46, known as ‘Traki-G’ in the dance world, went along to SkyOne’s ‘Got to Dance’ auditions at the Science Centre in Glasgow in June as moral support for her daughter Nikki, 22, who was performing with street dance group Unik.
But after an interview with the dance group, which features 16 dancers aged 12-26, it was revealed that the Kirkcaldy mum also knew how to burst some moves.
Nancy was persuaded to audition by fellow contestants and by the show’s producers and sailed through to the next round. 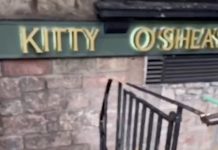