A TEENAGE student was forced to decide whether to stay in the top floor flat of a burning building – or overcome her lifelong fear of heights to be rescued by fire-fighters using a turntable ladder.

Pretty Alex Jeffrey, 17, and boyfriend Shae Grimsdale, 18, were woken by thick, choking smoke at the property near Edinburgh’s plush Stockbridge area shortly before 4.30am today (mon).

Shae has been staying in his parents flat on Buckingham Terrace while training to become an engineer in South Queensferry.  Girlfriend Alex, a sixth form college student, was up from Berwick visiting for the weekend.

Realising they were trapped with no way of fleeing down stairs they called for help and stood by their bedroom window.

But Alex is scared witless of heights – and was panicking when hero firefighters arrived at their window to save them using a turntable ladder.

She said: “After we called, the firemen came really quickly.

“They got us to climb out of the window and stand on this two foot ledge.

“But I’m scared of heights.

“I was scared, terrified.” 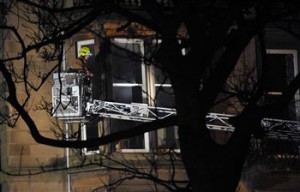 “It was either that or stay in the burning building.”

“I went down first, they checked if I was OK then went up for Shae.”

A large part of Buckingham Terrace in the West End of Edinburgh was cordoned off while Lothian and Borders Fire and Rescue Service tackled the blaze and secured the site.

The Red Cross were called in to help deal with evacuees and check for potential casualties at the scene.

Lothian and Borders Fire and Rescue Service deployed five pumps to the scene after the blaze spread from the first floor to the second, the worst of the flames said to have been in a space between both levels.

The fire was extinguished by 8.30am but fire crews were still on site checking the building for any potentially dangerous, hot spots.

Three relief crews were taking over around 8am with a mobile command centre also up and running to control operations.

Group manager, Geoff Aird of Lothian and Borders Fire Service said: “We were called to attend a fire in a first floor flat.

“The property was unoccupied. The crews entered the premises and started to combat the fire.

“The fire began in the kitchen area of the property and had spread through to the floor above.

“At the height of the blaze there were five fire engines and 30 fire fighters.

“Four people in total were rescued.

“Two were brought down using the turn table ladder that’s a height vehicle that was pitched to the balcony.”

A fire investigations unit reached the scene shortly after 8.30am to find out what started the fire at the five storey Georgian building.

Fire services had isolated the electricity supply and turned the gas off.

There was also an inflatable welfare tent on the street for firemen to recover from their duties.

Mr Aird explained this was needed as the crews had been into the blaze twice using breathing apparatus and this was particularly arduous work.

A spokeswoman for Lothian and Borders Fire and Rescue Service said: “This was a significant fire which involved fours rescues. Firefighters remain at the scene this morning to ensure that the fire is fully extinguished.

“Fortunately no one suffered serious injury due to the quick response from fire crews to evacuate the building.”