Zoo to ask for bamboo donations 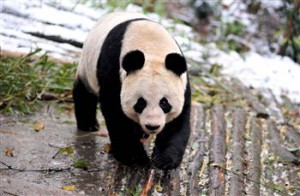 CASH strapped Edinburgh Zoo is expected to make a plea to members of the public to grow bamboo in their gardens and help the organisation avoid an annual fee of £70,000 to have supplies transported from Europe.

The transfer of giant pandas, Tian Tian and Yuangguang from China to Edinburgh was finalised last week after years of negotiation and the pair are expected to munch through 30 to 100 kilos of bamboo a day when they arrive later this year.

The zoo intends to establish a 10-acre bamboo plantation in Scotland which is due to be planted in the coming months but volunteers will also be asked to donate bamboo from their gardens.

The director of animals at the Royal Zoological Society of Scotland, which owns Edinburgh Zoo, Iain Valentine said: “We will need to grow a large quantity.

“A ten-acre site should keep us going for the entire time the pandas are with us.”

Mr Valentine said that it might be possible to grow bamboo at the Highland Wildlife Park situated on 230-acres near Kingussie and is the sister attraction to Edinburgh Zoo.

He added: “Usually, when this supplier ships the bamboo, he only has to go as far as Germany to Austria. By the time the bamboo arrived in the UK, the top part of it, which was not wrapped, had lost a lot of its moisture.

“We may decide to transport it using one of the flower carriers who travel across Europe as it may arrive in better condition.”

“We think there are a lot of people who would want to donate their bamboo.  Once bamboo begins to grow, it really takes off, so in a lot of cases, they will be keen to get rid of it.”

Gary Wilson, the zoo’s chief operating officer,  said: “San Diego uses its population to supply bamboo for its zoo and take two or three stems from each resident who has signed up on a rotational basis.

“It may well be a possibility to use the people of Edinburgh in the same way.  A lot of people now plant decorative bamboo in their gardens.

“We have also been testing planting bamboo on site.  The closer to home that we get it the better, because that cuts out transportation costs.

“If we transported bamboo from Europe it would cost £70,000 per year.”

Visitor numbers to the zoo are expected to soar once the pandas arrive, with bosses estimating a rise of 100% to more than one million.  Visitor numbers leaped up by 70% in Adelaide, Australia when pandas were introduced there.

Mr Wilson added: “We have had a massive amount of people wanting to sponsor the pandas.  We’ve had hundreds of calls from all over Britain.”

The zoo has begun work to convert the gorilla enclosure to house the pandas and is due to be completed by the end of the month.

Their home will include an evergreen forest and climbing structure, all at the expense of the zoo.

The high level of interest that the pandas have received provides an indication that the presence of the pandas at Edinburgh will provide much needed revenue to support the pandas.

Tian Tian and Yangguang will be the first pandas in the UK for 17 years and Edinburgh Zoo will join the four zoos in North America that have pandas as well as Mexico City, Berlin, Vienna and Madrid.