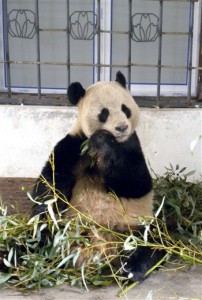 THE arrival of two giant pandas to Scotland has been blasted as “foolhardy” by the boss of an international wildlife charity.

The CEO of the Born Free Foundation, Will Travers said that the arranged loan of breeding pair, Tian Tian and Yangguang to Edinurgh Zoo from China was “little more than animal exploitation”.

The transfer of the pandas was finalised last week after years of negotiation with the Chinese government and the pair are will arrive later this year.

Mr Travers also stressed that the zoo should not receive public money for the £7m project after news that it may request funds from the Scottish government.

It was revealed earlier this month that the zoo was exploring options to maintain bamboo supplies for the hungry pandas that are expected to munch through 30 to 100 kilos a day at an annual cost of £70,000.

One solution was to ask Edinburgh residents to donate the required vegetation from their gardens.

The arrival of Tian Tian and Yangguang will mark 17 years since the last time pandas lived in the UK and Edinburgh zoo staff hope that the pair will breed.

It is thought that Scotland’s climate may help the chances of the birth of a baby panda because it closely resembles that of their natural habitat in China.

Mr Travers said: “I am convinced that Scotland does not need pandas any more than pandas need Scotland.  More over, the Chinese government does not need the money.

“I hope that they will, in fact, review the whole ‘loan a panda’ enterprise and abandon it in favour of increasing domestic efforts to secure a long-term, wild future for giant pandas in their natural habitat.”

He added: “It appears that commercial sponsors, quite rightly have other priorities (and may share our view that this whole thing is little more than animal exploitation).

“And the Scottish government, while it may have helped shuffle the paperwork, doesn’t want to pay for them to come.

“In a time when everybody is tightening their belts, and with the prospect of cuts to essential services, the zoo should not be asking taxpayers to pay a penny towards this unnecessary and foolhardy venture.”

Edinburgh zoo responded, adamant that taxpayers would not foot the bill and claimed that enough commercial sponsorship would be found.

Chief operating officer, Gary Wilson said: “We have already had informal discussions with potential sponsors and now that the agreement has been signed we can take these on to a more formal phase.”

He added: “The best chance of survival of this very special species is to have in place a carefully managed captive breeding programme, while at the same time working with pandas in the wild and on the protection of their environment.

“This is a valuable partnership that will share expertise and progress in these areas could lead to the re-introduction of pandas into the wild in the next 10 years.”