AN unpublished letter written by poet Robert Burns more than 200 years ago has been discovered at a Scottish Castle. 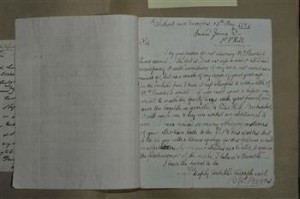 ailed by experts as a “remarkable literary discovery”.

It was uncovered at Floors Castle in the Scottish Borders, the home of the Duke and Duchess of Roxburghe, in a 19th century autograph album owned by the sixth Duke of Roxburghe, James Henry Robert Innes-Ker.

The album also contained historical documents belonging to members of the family dating back to the time of King Charles I.

The letter was addressed to James Gregory, who was the Professor of Medicine at Edinburgh University and the head of the city’s medical school when it was written 222 years ago.

It was sent by Burns on 13 May 1789, from Ellisland, his farm in lower Nithsdale near Dumfries.

In the letter Burns asks Gregory for criticism of the poem, which was published in the Edinburgh Edition of his poems in 1793, and thanks him for his support.

Sir Guy David Innes-Ker, the current Duke of Roxburghe, said: “This discovery is a delightful surprise.

“We do not know how the sixth Duke came into possession of the letter but we believe he was a keen collector of letters and autographs as Dickens’ autograph also features in the book.

“Like most Scots, we are huge admirers of Burns and Burns night will have extra special meaning this year. 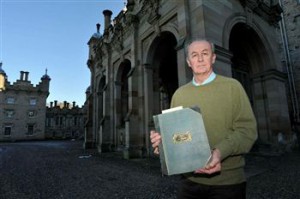 “The letter will go on public display at Floors when the castle opens to the public in the spring.”

The discovery was made by the castle’s visitor services manager and the letter has since been verified by Professor David Purdie, editor-in-chief of the Burns Encyclopedia, Doctor Iain Gordon Brown, principal curator of manuscripts for the National Library of Scotland in Edinburgh and Doctor Gerard Carruthers, director of the centre for Robert Burns Studies at The University of Glasgow.

Professor Purdie said: “This is a remarkable discovery.

“Unpublished letters of Robert Burns are extremely rare and this example is doubly interesting as it not only displays the evolution of one of his poems, The Wounded Hare but, in Burns and Gregory, it brings together major figures of both the literary and scientific components of the Enlightenment.”