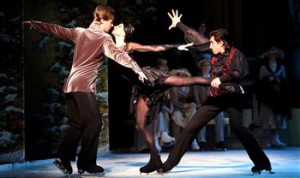 Ice, flames, snow and floating ice skaters are definitely the recipe for a spectacular ice dance show and a great night out.

So when Swan Lake on Ice arrived in Edinburgh I jumped at the chance to go along and see the Imperial Ice Stars with my own eyes.

The team of Russian skaters have notched up 250 medals between them and are no strangers to the theatre having performed Sleeping Beauty and Cinderella on stage.

But having only seen ice skating in sports competitions on TV and on ITV’s Dancing on Ice I didn’t know what to expect from a ballet classic being performed in the theatre on ice.

I must admit that I have never been to a ballet performance and have no prior knowledge of Swan Lake but I thought that the show was fantastic and looked amazing on ice.

From the costumes to the set and of course the skating and the music, everything slotted together perfectly.

Elements of ballet were cleverly brought in as Odette, played by Olga Sharutenko (who appeared on series one of Dancing on Ice) danced in ballet shoes on the slippery surface in a beautiful love scene between her and the prince.

And the show featured amazing stunts from Sharutenko floating in mid air suspended from wires.

The performance was intertwined with spectacular spins and lifts and intricate foot work which left the whole of the audience completely mesmerised.

The white swan and the black swan were played by two different performers but it made some of the dances more beautiful as the leading ladies danced together and portrayed the love story perfectly.

I would highly recommend going to see the show if it returns to Scotland.