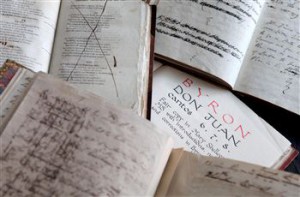 A BYRON fan is considering paying £10,000 to adopt one of the writers famous manuscripts in a scheme aimed at preserving a unique publishing archive.

The National Library of Scotland’s Adopt a Manuscript scheme contains 100 unique John Murray Archive manuscripts  – many of which are handwritten by Scotland’s greatest writers and thinkers.

And one anonymous donor may splash thousands of pounds on one of the most expensive documents in the collection by Lord Byron.

A Benjamin Disraeli manuscript has also been adopted anonymously for £1,000 in memory of John Steven Watson a former Principal of the University of St Andrews.

And the Jane Austen Society is interested in the adoption of an Austen item which is to be considered at their next committee meeting.

David McClay, senior curator, said: “It’s the most extraordinary collection. We acquired them for a bargain at £31.3 million which is still a lot of money.

“There are a quarter of a million items in the collection and we have chosen a range that people can sponsor.

“They are sort of huge names that people will recognise but there are some lesser known names too from areas such as science, travel and also politicians that will hopefully open it up to the widest possible audience.

“People from all over the world are coming to consult this collection so it’s quite exciting.”

The John Murray Archive is a treasure trove of 150,000 papers recording the business of the influential John Murray publishing firm which was associated with many famous names including Charles Darwin, Jane Austen, Sir Walter Scott, Lord Byron, David Livingstone and many more.

The programme forms part of the library’s drive to raise the remaining 10 per cent of its funding target needed to secure the future of the prestigious archive.

So far it has generated over £30 million, with £3 million still to raise.

Karen Boyle, who works in the development department at the National Library of Scotland, said: “It is likely popular characters from the archive, such as Austen and Byron and Charles Darwin, will prove popular in the longer term.

“We hope to have additional John Murray Archive items up for adoption and items from the wider collection available for adoption in the future too.”

Items include a letter from 1815 from Jane Austin, urging printers to speed up their work, with the mention that ‘Emma’ would be dedicated to the Prince Regent and also Sir Walter Scott’s eulogy for Lord Byron, dated 1824.

Anyone who adopts a manuscript will receive a certificate, an online acknowledgement, and an acknowledgement on the item or container at the National Library of Scotland.

Information can be found on the Adopt a Manuscript web pages on www.nls.uk or by calling 0131 623 3804 or emailing [email protected].