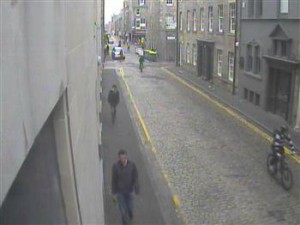 THESE are the images of two people police say are vital to their investigation into the disappearance of Edinburgh woman Suzanne Pilley.

Lothian and Borders Police have released the CCTV footage, which shows a man and a woman on Thistle Street – one of Ms Pilley’s last known locations, the day she disappeared on 4 May last year.

The pictures show a woman who looks to be aged between 18 and 30-years-old, with long, dark hair which was tied up, entering Thistle Street from Hanover Street in the city centre.

She is slim and wearing a black waist-length jacket, a black and white scarf, black knee-high boots with grey tights and a short skirt, and was carrying a bag over her right shoulder.

Police believe she may have been walking to a small blue car, possibly a Volkswagen Polo, which is seen in another shot driving off a short time later.

The car may have also slowed down a bus as it turned onto St Andrews Square.

The man walking in front of the woman on the same side of the street is believed to be aged between 20-40, with short dark hair and a medium build.

He was wearing a brown waist-length jacket, blue jeans and was carrying a green plastic bag which was possibly from Marks and Spencer.

Police are urging people to take a close look at both the man and woman in the hope they can identify them.

Detective Chief Inspector Gary Flannigan said: “Please take time to look carefully at these images. Do you recognise yourself or a friend?

“It is very important that we speak to these people in order to determine that they have no additional information to offer the enquiry.”

Suzanne Pilley, 38, who was a bookkeeper from the Stenhouse area of Edinburgh, vanished on the morning of 4 May as she made her way to work

Her disappearance is being treated as a murder investigation, though her body was never found.

Ms Pilley’s former lover, 47-year-old David Gilroy, has been charged in connection with her murder and after two appearances at Edinburgh Sheriff Court, he has been fully committed to trial.

Gilroy, who has a wife and two children, was released on bail after his second court appearance in July last year and a date for the trial is still to be confirmed.

Ms Pilley worked for Infrastructure Managers, a company which used to employ Gilroy. The pair had a year-long relationship.