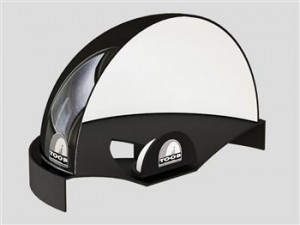 FILM fans and gaming enthusiasts could soon be watching movies and playing video games in mini iMax style home cinemas thanks to a huge funding boost for a Scots based tech firm.

Researchers at aB Simulations in West Lothian have been working on plans for the world’s first dome shaped virtual 3D hub – which uses similar technology to flight simulators.

It would mean anyone watching the screen would find themselves ‘immersed’ in the heart action – but from the comfort of their own home.

But the £10,000 development cash – coming from Inspired and SEEKIT grant funding – could lead to an even bigger first for the Bathgate company, a chance to crack the  highly lucrative ‘virtual simulation’ training industry.

The firm are in talks with universities who hoped to harness the technology to show medical students a brain examination and a dentist who would like to show patients their oral examination as is happens.

The so called ‘Simulation theatres’ can be used for other training purposes such helping police on their advanced driving course prior to training on the roads or for crane driver training for oil rigs.

Managing director Alexander Bradley described how the new dome screen would work.  He said: “If you imagine taking an orange and cutting it in half and you would sit at the flat base looking into the dome.”

He added: “It provides an experience of being surrounded by content giving the person watching a sense of being involved.

“The idea is that we fill peripheral vision with constant content and the effect is that the person gets drawn into an immersive experience.”

“The only other thing that is similar to this is using a combination of three LCD screens and this doesn’t fill all fields of view meaning that it is not as effective as a dome as there are gaps where the screens join.” 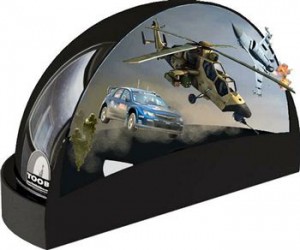 The cash also means the firm can now look at ways to harness their product for the potentially lucrative gaming market.

Mr Bradley said: “Obviously we want simulation for as many people as possible and bringing the technology altogether in one place and making it a more affordable home asset.

“We do not see this taking over from the traditional flat screen but to be used in a dedicated room or area for entertainment.”

The venture will see the Bathgate business combine forces with the American firm, Think Out Of The Box (TOOB) and bring Scotland’s best research, development and engineering minds together with industry and university experts from around the world.

Mr  Bradley added: “The development projects are expected to end in late December with a view to beginning production by mid 2011.

“We believe that a number of key markets including automotive, aviation simulation, film entertainment and 3D gaming will generate additional revenues through our innovation.

“Business Gateway West Lothian has provided lots of impartial advice and helped me focus on the challenges of commercialisation.

“The University of the West of Scotland has provided access to their experts in thin film and polymer development which is crucial for this project.”

Executive Councillor for Transport and Development, Martyn Day, said: “It’s a priority for us in West Lothian to continue establishing innovative technology businesses.

“This project will create quality jobs locally and across the Scottish economy, increasing exports and helping to sustain revenues for other companies in the supply chain.

“I look forward to seeing aB Simulation go from strength to strength.”