Outrage at the potential slaughter of zoo piglets 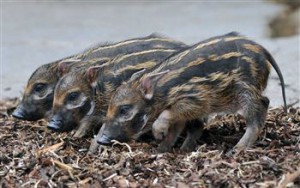 THREE endangered piglets might be culled at Edinburgh Zoo just two months after their brother and sister were killed because they were “surplus to requirement”.

A worldwide breeding programme has the power to command the death of the Red River Hog triplets, called Ellis, Nelson currently living at Edinburgh Zoo.

The European Endangered Species Programme (EEP) works to co-ordinate the breeding of many species through a process called recommendation.

If the species does not have a recommendation the EEP recommends that the animals are culled rather than rehomed.

In response to news of more piglets might be killed following the deaths of Sammi and Becca protesters have called for zoo bosses to find an alternative to culling.

An insider at the zoo said:  “I wouldn’t be surprised if they were culled. Many zoos and animal organisations around the world adhere to the breeding programme and more animals are put down than you think. It would be a bit stupid if the zoo didn’t learn their lesson.

“You have to wonder why three healthy animals can’t be rehomed and if the zoo knows there’s a good chance they’ll have to be killed, why let them breed in the first place? It is not something all staff agree with.”

Libby Anderson, policy director for animal protection charity One Kind, questioned the reasoning behind the idea of killing animals.

She said: “Zoos look at animals in terms of managing collections, but each animal is an individual and I don’t think they can possibly justify killing these three baby hogs simply because they are deemed surplus to the requirements of a breeding programme.

“We would urge the zoo to tell the public the truth about these breeding programmes and their actual contribution to helping endangered species survive in their native habitats.”

A spokeswoman for Edinburgh zoo explained that there were regulations of the breeding programme that were to be adhered to.

She said: “As a zoo we comply to the regulations and recommendations of the European Endangered Species Programme (EEP), however we always make every effort to re-home all animals wherever possible.  We do appreciate this is a sensitive issue, but it is jointly a very complicated issue.”

Red River Hogs Hamish and Bella bred for the second time in June last year, a few months after the first babies were culled.