A WOMAN accused of murdering her three young children was in tears as she made her first public court appearance.

Theresa Riggi, 47, is alleged to have killed eight-year-old twins Austin and Luke and their sister five-year-old Cecilia, at their home in Edinburgh last year. 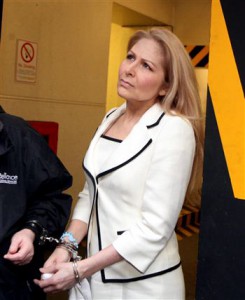 During a short preliminary hearing at the High Court in Edinburgh today (Fri), Riggi made no plea.

She is also accused of culpably and recklessly causing a gas explosion.

Prosecutors allege that Cecilia and the twins, who are also known as Augustino and Gianluca, were repeatedly struck on the body with a knife or knives.

Riggi, originally from America, is further alleged to have removed a gas hob from its fixings and undone screws from the burner valves, allowing gas to escape.

It is claimed she made sure the windows and doors were locked and ignited the gas, causing it to explode.

The charge alleges that the fire which followed caused damage to the property, putting people in danger and severely injured Riggi.

All the events are alleged to have happened between August 2 and 4 last year at an address in the city’s Slateford Road, where she and her children were living.

She clutched a handkerchief as she sat in the dock, wearing a white dress and jacket.

Defence QC Donald Findlay told the court there continues to be an “ongoing discussion” with the Crown “as to the best way in which this matter might proceed”.

A new date has been set for a continued preliminary hearing at the High Court on 7 March.

Lord Kinclaven told Riggi, who was allowed to remain seated as he addressed her: “What I’m going to do is continue this matter, without any plea having been tendered on your behalf, to the date that’s been mentioned – the seventh of March 2011.”

The judge told Riggi she would continue to be remanded in custody.

Incompetent nurses can no longer be struck off, says health watchdog