POLICE have confirmed the identity of a young man who was murdered in Tranent, East Lothian yesterday morning (MON).

Twenty-two-year-old Paul Jared Scott, from the Niddrie area of Edinburgh, died at an address in Toll House Gardens having been the victim of a serious assault.

Lothian and Borders Police have released a statement on behalf of the Scott family.

It says: “Paul was adored by all his family and many friends, and we are all heartbroken.

“Our son, we will miss you forever xx.”

Inquiries are ongoing to establish the circumstances surrounding Paul’s death, and police continue to appeal for anyone with any information regarding the murder to come forward.

Detective Chief Inspector Willie Guild, who is leading the investigation, said: “We are asking anyone who may have been in the area of Toll House Gardens around 4am yesterday morning, and who may have seen or heard something suspicious, to get in touch.

“In particular, we are keen to talk to any taxi drivers who may have been called to the Tranent area in the early hours of yesterday morning.

“Paul Scott was subjected to a vicious attack, and we are asking for the public’s assistance to identify the person responsible.

“I would urge anyone with any information to get in touch a matter of urgency.” 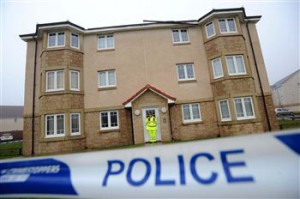 Officers are currently exploring CCTV  footage from the area and a search of the grounds was taking place this afternoon.

Detective Chief Inspector Willie Guild, who is leading the inquiry, said: “This young man has been the victim of a violent attack, and we are appealing for help from the public in order to identify his killer.

“We are asking anyone who was in the area around 4am this morning, and who may have seen or heard something suspicious, to get in touch.

“It is also important anyone who has any information in connection with this murder comes forward, either directly to us, or anonymously through Crimestoppers.”

The scene of the crime is a quiet cul-de-sac. Police cordoned off the three storey block of flats immediately.

At 1pm, four police officers began to search the grounds surrounding the flats including small shrubs at the front, under parked cars and the enclosure where the rubbish bins are kept.

There task made more difficult by heavy snowfall. 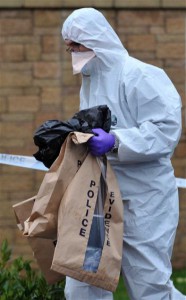 Mandy Thomson, 52, a resident of the adjacent block of flats. She said: “We moved in just two months ago and are shocked by what’s happened.

“There has been bickering between neighbours but nothing major.

“I got up at 6 this morning and was really shocked to see the tape, the police were there then when I took the rubbish out at 8am by then there was an ambulance, police and forensics.

“My husband and me are owner occupiers but we have since found out that a lot of these flats a rented. I have got grand children and I’m worried about them coming to visit. You would think for a new build area you would be ok.”

Victor Charman, 78, lives in a flat that is behind the building where the murder took place.

He said: “Between 12.30am and 1am I saw a red car parked outside. It sat there and there was somebody inside I could see a light from a cigarette un the car.  They seemed to be waiting for somebody.

“I went out to the kitchen and when I came back they were gone.”