NHS Lothian has become the first health board in Scotland to create an iPhone app.

The “Sign up to Save a Life” app is aimed at encouraging organ donation and makes it easy for potential donors to join the national register while on the go.

And the app has been given the thumbs-up by Anna Burnett, 25, from Edinburgh, who underwent a life saving liver transplant when she was just ten years old after being diagnosed with Crigler-Najjar Syndrome as a baby.

She said: “I think a lot of people have complete misconceptions about transplantation because they don’t know enough about it and don’t realise what an amazing difference it can make.

“Even now, 15 years on, if I mention that I have had a transplant I still see the look of shock on people’s faces. It’s becoming more and more common nowadays and people need to realise that it can happen to anyone at anytime.

“That’s why I think the iPhone app is a fantastic idea as this tends to be an issue many people try to avoid or claim they are too busy to think about, but the app makes it so quick and easy to know the facts and take the decision to join.”

Despite her transplant at such a young age, Anna has gone on to become the most successful Scottish transplant athlete of all time and she holds the 400 metre world record for the European Transplant Games.

Anna now competes in mainstream athletics and last year she competed in the Commonwealth Fencing Championships in Melbourne, Australia. 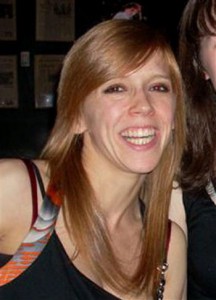 Lothian already has one of the highest numbers of people on the register in Scotland, but NHS Lothian wants to increase the number from 42 per cent to at least 50 per cent of the population.

A dedicated website, information pack and real-life short films have been created, allowing organisations to get involved.

The campaign launch follows the 50th anniversary of the UK’s first live donor kidney transplant at the Royal Infirmary of Edinburgh in 1960.

People can also register by texting “fifty” on their mobile phone to number 61611.

The app includes general information, quick facts, and a direct link to the national organ and tissue donors registers either via web browser or text.

For more information on organ donation and transplantation in Lothian visit www.nhslothian.scot.nhs.uk/signuptosavealife

The app is available to download free of charge from iTunes App Store and is suitable for all ages.